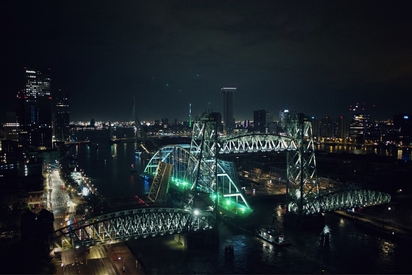 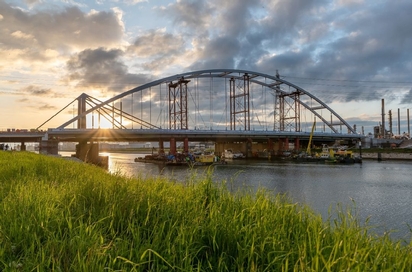 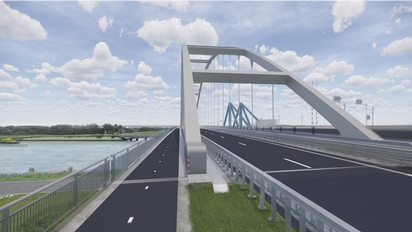 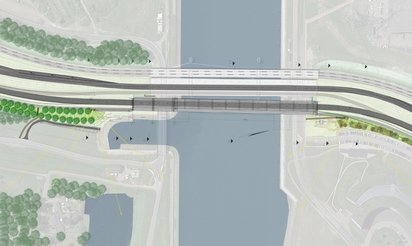 The Suurhoffbrug arch bridge of approximately 200m long, 20m wide and more than 40m high was transported from the yard in Krimpen aan den IJssel straight through Rotterdam, passing several other iconic bridges, such as Van Brienenoord Bridge, de Hef, Erasmus Bridge and Botlek Bridge.  The second part of the journey led via the Hartel Canal to the Maasvlakte. In the night of 14 to 15 May, the bridge was first turned so that it came to lie parallel to the existing Suurhoff Bridge. The jacking up started around midnight and at 9 p.m. the bridge was in its intended position.
The final work on the Suurhoff Bridge will be carried out in the coming weeks. The joints will be closed and the road surface will be asphalted.
Traffic is expected to cross the bridge towards Rotterdam by the end of June at the latest.

Commissioned by the STIPT Combination (Dura Vermeer, BESIX, TBI, Hollandia), MTD landscape architects have drawn up detailed development plans for the landscape integration of this temporary connection in the Europoort / Maasvlakte area and Hartelkanaal. But detailed designs were also made for a family of individual parts of the bridge itself, such as the arch, noise barrier(s), roads and cycle path, hangers, lighting, edge finishes and handrails.
Within the technical preconditions set for the bridge, a logical and aesthetic coherence of elements for the users was sought; both for freight traffic to the Maasvlakte and for recreational bicycle traffic.