a villa in the forest

In the spring of 2014 Mr. and Mrs. van Esch obtained the foresters cottage situated in the fens of the forests in Oisterwijk from Natuurmomumenten, the Dutch foundation for the preservation of nature reserves. They had the ambition to redevelop the location and build a forest house on this location designed by Jacques de Brouwer / Bedaux & de Brouwer architecten. MTD received the assignment to develop a plan for the location and garden of the forest house in close collaboration with the architect, the interior architect INA MATT and the client. The architectural appearance and garden of forest house’s should integrate seamlessly with the surrounding forest area of the Oisterwijk’s fens. The house received the name ’t Brouwhuis, called after the fen which the building is orientated towards.

The forest house consists of a longitudinally stretched volume, comprising a single floor with a pitched roof that in respect to the general direction disconnects itself from the van Tienhovenlaan and focuses itself onto the dwarslaan that ends up at the Brouwhuis. Here a chimney is the only accent in the main volume.
The orientation of the house maximizes the view onto the Brouw fen on the other side of the van Tienhovenlaan using an open end façade. The volume is materialized in black painted wood using a more or less closed side facing the Boslaan and a side with maximum openness facing the garden side. The building is visually anchored to the site using a concrete plinth that floats above the ground and is connected to adjoining stairs in 4 places. As a differentiation a round hole has been spared in the plinth near the front door in which a Robinia grows.
The plinth forms the transition from inside to outside; from house to forest landscape and widens itself in several places creating unique seating locations. At first glance the terrace at the head of building; facing south, from which one has an optimal view onto the Brouw fen. Using a privacy screen that can also slide in front of the façade, the seating area can be closed off somewhat from the van Tienhovenlaan. A more private terrace is the one situated at the west side of the house. It is connected to the kitchen and an opening in the façade offers shelter from which one can enjoy the views onto the forest and fen in the evening sun. A water object and drinking place for birds and wild animals has been introduced here between the trees to increase the sense of depth towards the forest landscape.
The forest house is further anchored to its location in the forest through the use of a single steel band that marks the transition between the lawn, the semi hardened driveway and the forest planting consisting of ferns, wild honeysuckle, Spanish bluebells, lilies of the valley and heartleaf foamflowers. The present trees determine the atmosphere of the garden and are preserved as much as possible. One of the more important present elements are a monumental copper beach tree and a group of acacia’s nearby the entrance. A Newly added element will be a multi-stemmed sweet chestnut or an eastern black walnut tree placed in the grass on the south side. The garden’s privacy is increased through the natural terrain elevation; the van Tienhovenlaan and the forest path on the other side of the house are respectively placed 0,75 meter and 1,60 meter lower than the floor level of the future house. In addition planting proposed mainly on the north side of the garden facing Groot Speijk consists of evergreen rhododendron’s. Along the other side, the transition from garden to forest is kept as inconspicuous as possible. Only the entrance along the van Tienhovenlaan is marked by a gate; a 0.60 meter high concrete wall in which the letters ‘t Brouwhuis have been cast and a black wooden door. Behind the gate a semi hardened surface marks the route to the house and provides parking spaces for two cars. It is connected to a barn which like the forest house is build from blackened wood. Here there is room for lumber storage, 2 bicycles, garbage containers and a nesting box for bats. 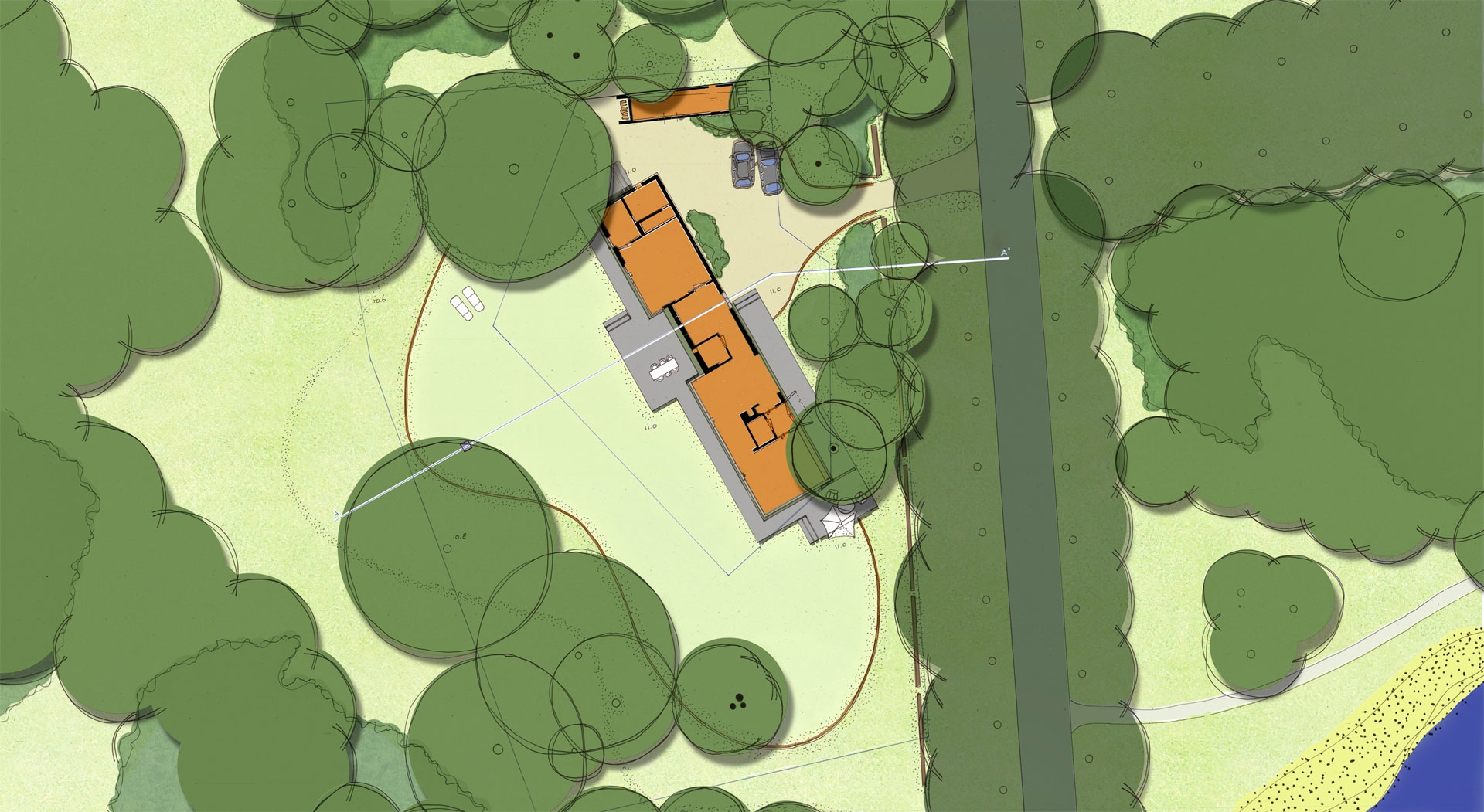 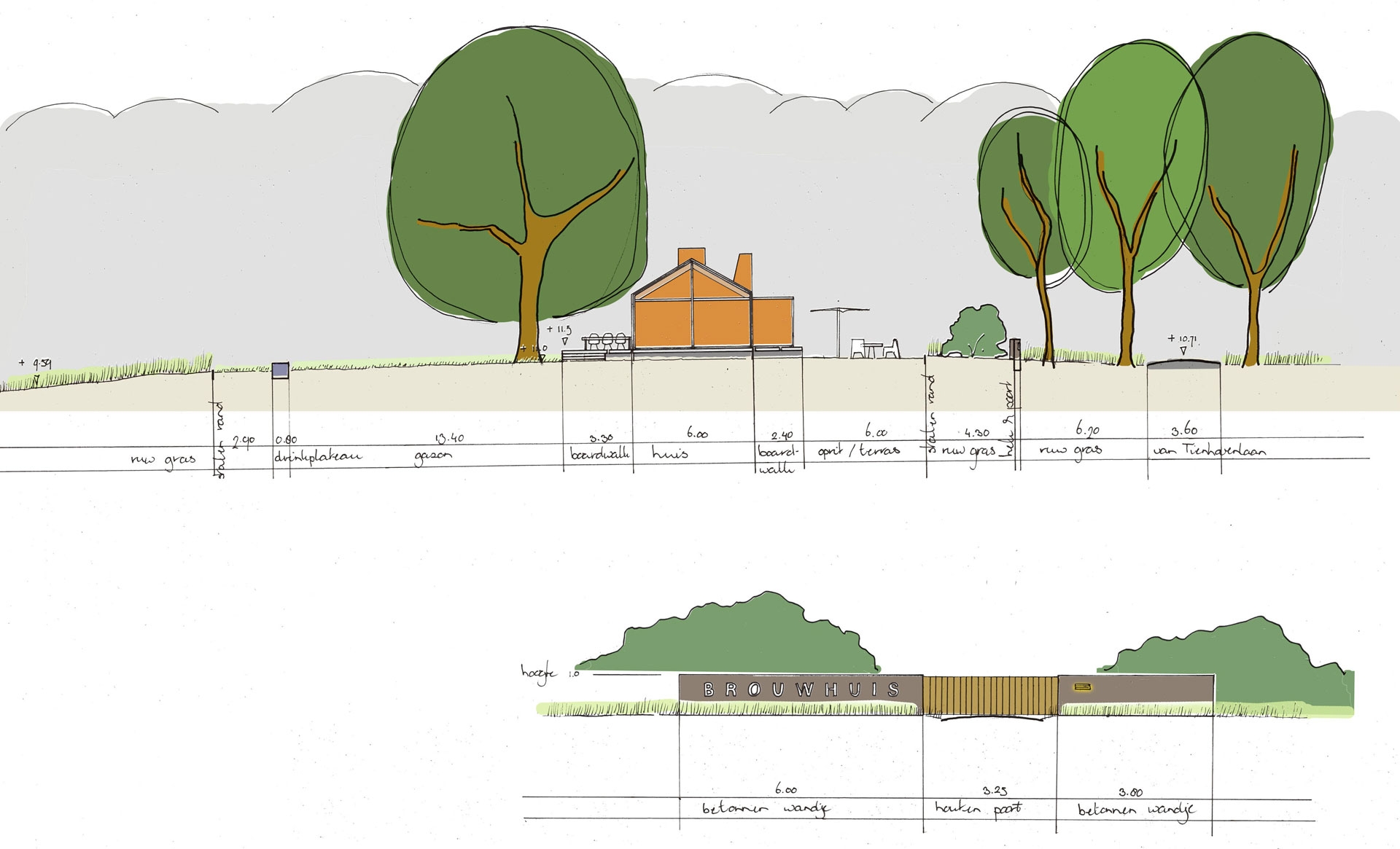 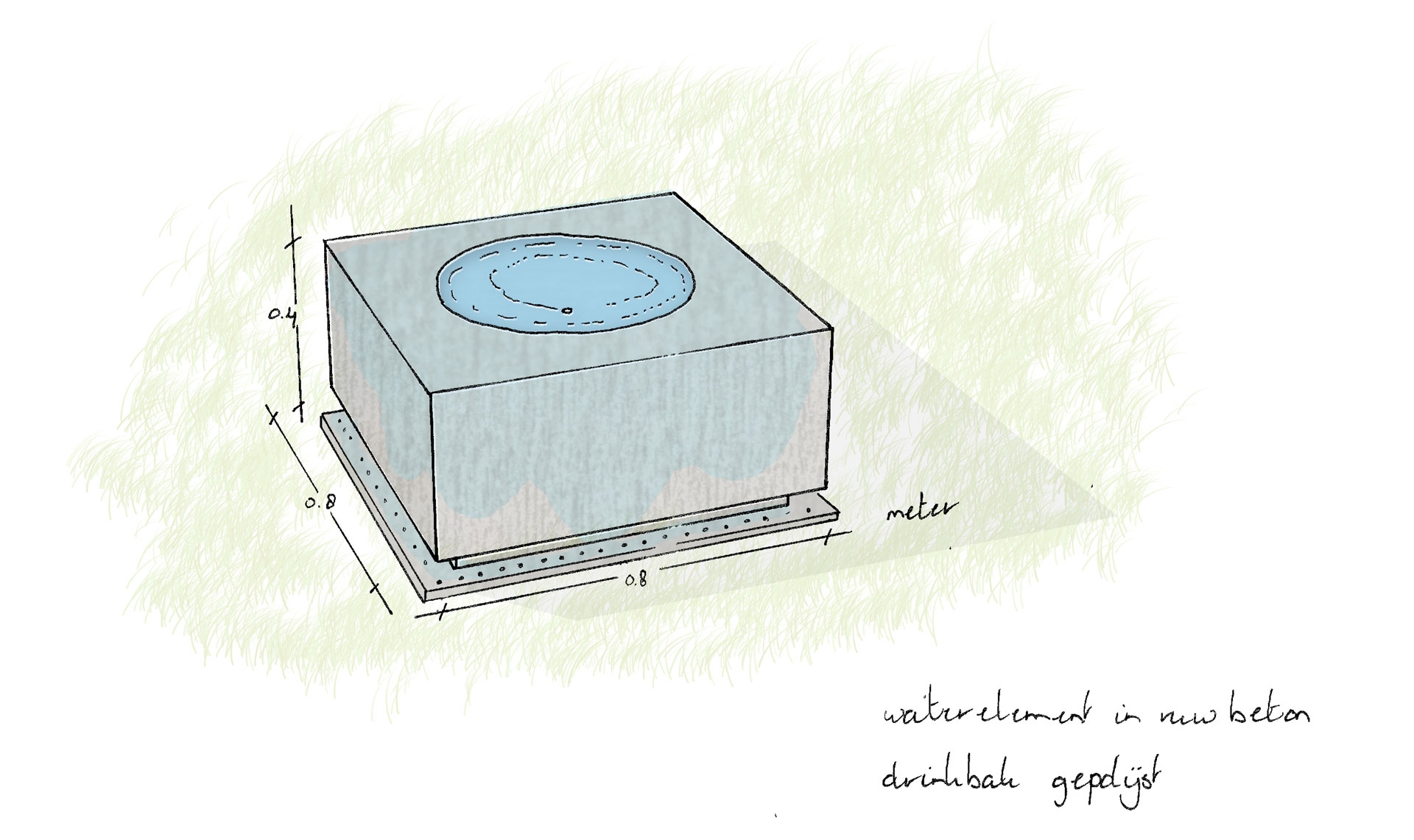