In 2007 MTD landschapsarchitecten was commissioned by the Municipality of Schijndel for the redevelopment of the market square. This is an important square in the core of Schijndel where the weekly market and other events are held. It was especially because of ad hoc choices that had been made in the past without an integral plan, and because of the increasing traffic and parking problems, that the municipality decided on an integrated approach to address the public space in the village core. An important step that was taken, was to pedestrianise the city centre and to transform the city centre from a traffic area into a habitable area.

The proposed interventions involve three levels. An initial strategic goal was to relocate the parking from the present market square to the direct vicinity of the shopping area. That's why the proposal was launched at that time to allocate a number of locations where parking is permitted. By way of shortcuts, the so-called alleyways, direct links were made in the direction of the city centre. Another important factor of the city centre is the weekly market, which also has a certain regional significance. Every Saturday there's a bustling hive of activity and that's what a city centre needs. So the market square was also given such a spatial design, that the weekly market itself has many alternative layouts. Moreover, this area also provides space for various events, without obstacles being a nuisance. A third important goal was the augmentation of the identity of Schijndel, by giving the village core a rural, relaxed appearance, in which the striking buildings of the church and the glass farmhouse take up prominent positions. The glass farmhouse which was designed by Winy Maas from MVRDV, is a scale model of a typical Schijndel farmhouse enlarged 1.8 times. Here the farm yard was also designed by MTD on an oversized scale. Schijndel also presents itself as an artist's municipality, and uses art as a binding element in the public space. The public space is given an artistic appearance by means of strategically chosen locations. A great deal of attention has been paid to the choice of materials. The renovated square has mainly been provided with characteristic granite cobble stones which have been laid in a special fan shape and enclosed with a very wide strip of natural stone. For the centre runners, recycled paving bricks have been used which emphasize the rural character, and the edges have a mottling of small-sized paving stones. For the rural, relaxed appearance of the high street the option was made to place the trees ‘at random’ in the street profile and at the square. This randomness was also determined by the subterranean infrastructure of cables and piping. At certain locations espalier trees were proposed to match up with the architecture of the façades. For the market we opted to plant huge and heavy biologically cultivated trees. This fulfilled the municipality's objective in respect of sustainable acquisitions. 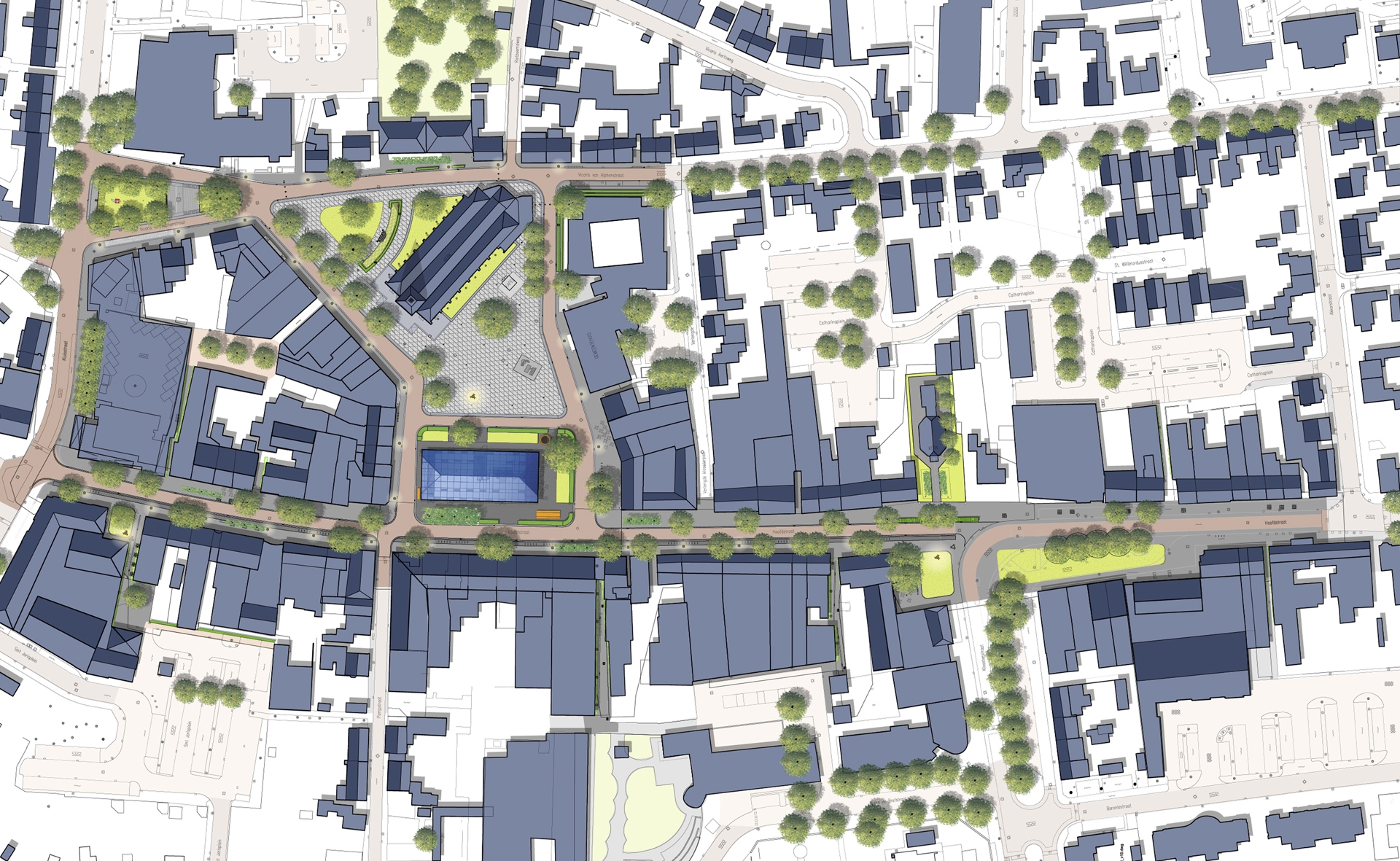