renewed significance for the defence line around Amsterdam

The Geniedijk forms part of the Stelling van Amsterdam, a military defence line which was constructed between 1880 and 1920 at a distance of about 15 to 20 kilometres away from the city centre of Amsterdam. The arrival of aeroplanes only a few decades later meant the environmental collapse of this defensive work and the birth of a culture-historical relic. The status of the Stelling van Amsterdam within the Unesco World Heritage listing makes the Province of North Holland responsible for the preservation of the culture-historical meaning of the defence line.
Due to the development of business premises in the area, the open and agricultural environment of the Geniedijk will change drastically in the near future. The ambition to give its culture-historical and military values a renewed significance, were embodied in the brief given to MTD landschapsarchitecten in January 2006 to draw up a concept for the Geniedijk within the urban landscape of Hoofddorp, as well as to design the bridge in the cut-off of the dyke at the A4 / N201.

the design
The design encompasses strategic interventions on 3 scale levels; the scale level of the defence line, the Geniepark and the bridge.
On the scale level of the Stelling van Amsterdam (defence line of Amsterdam) the challenge is to secure the rural scale and engineering structure by incorporating the Geniedijk in a park. The Geniepark forms a valuable link in the regional green structure. It is a new recreational area for Hoofddorp and an image carrier for the development of business parks in the future.

The scale level of the park targets the characteristic asymmetrical build-up of the defensive work for the design. Hence the dyke on the defensive side has been provided with a grid of poplars, which refers to the army of soldiers that had to defend the capital city. The attacking side or field of fire has been kept open and has been preserved for its perspective on the Stelling van Amsterdam defence line. The openness is guaranteed in the design through the introduction of a broad watercourse, a fringe of reeds and the planting of trees in a rural way. The entrances to the park are marked by means of bridges which underline the water-abundant character of the Stelling van Amsterdam defence line. A rather special place in the Stelling van Amsterdam defence line forms the bend in the otherwise dead straight dyke. The battery situated here, which is strategic in military terms, forms a focal point within the Geniepark; a look-out point and a platform for special events.
In the way that the forts and batteries bind the Geniedijk with its background, so the future situation of the ‘varied surfacing’ to the A4 will bind the dyke with its situation. The bridge in the dyke is perceived as a contemporary addition and leaves the historical monument undisturbed. In the spirit of the defensive work, it links up the ‘friendly’ side of the dyke; linear to the rear canal. From the bridge, vistas can be seen on all sides. In the use of materials a match was sought for the idiom of the Stelling van Amsterdam defence line; steel was used as a structural material with a rusty, ‘robust’ detailing. 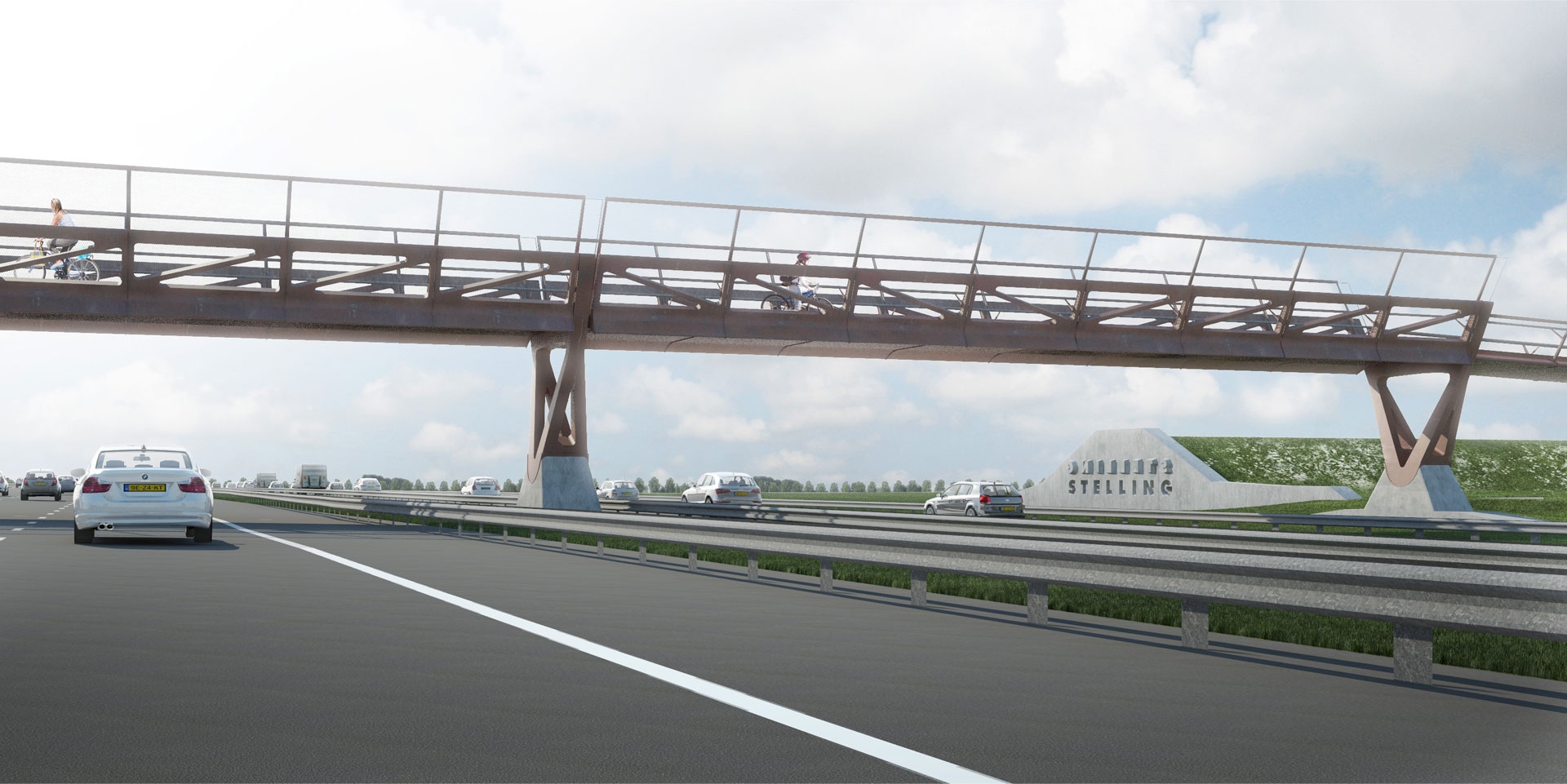 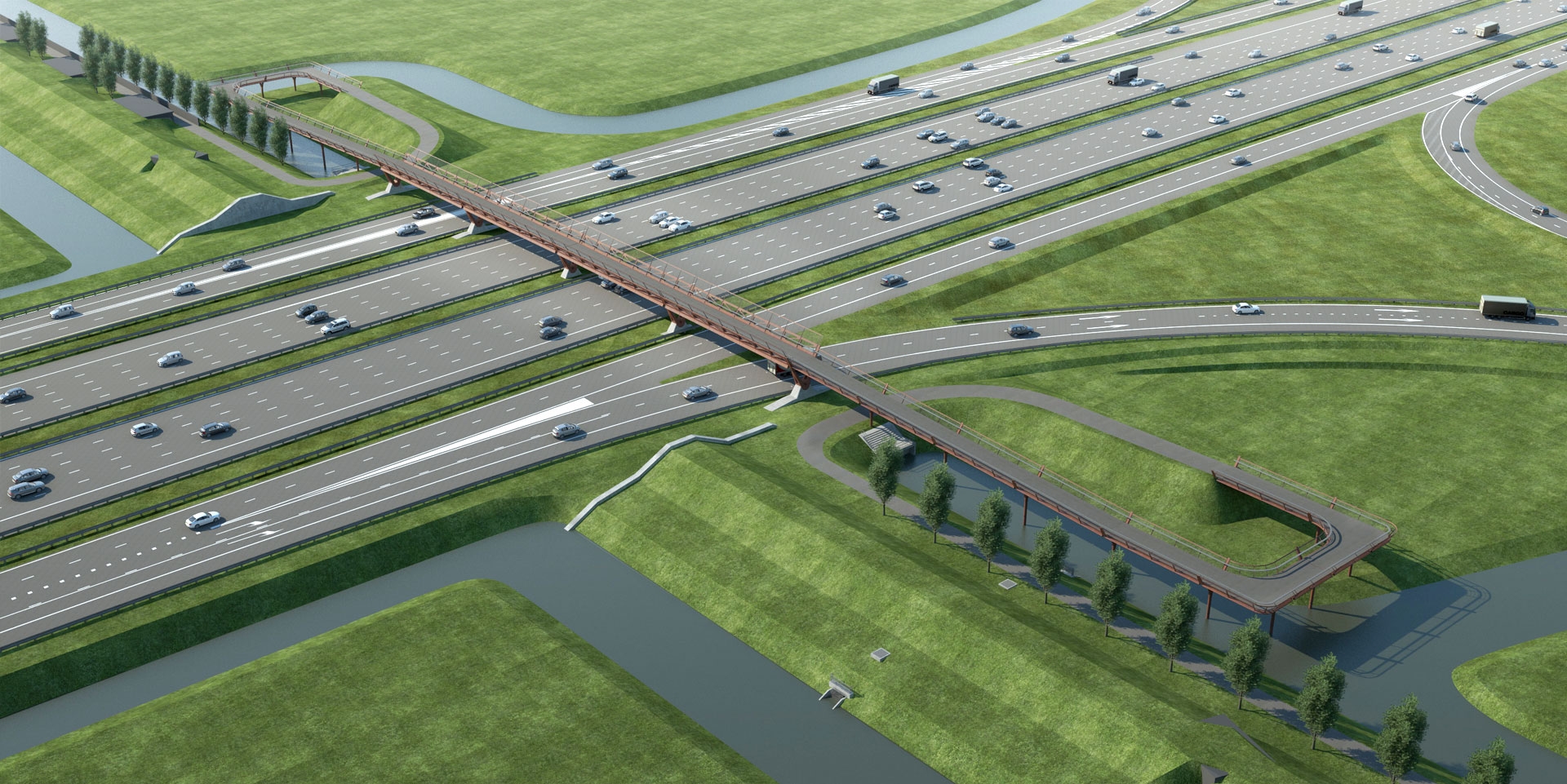