living along the rampart

The Raambuurt is a unique infill location situated on a former industrial site within the city walls of Deventer. The new housing area is situated at the dried-up inner harbour where Emmastraat / Kazernestraat are currently located; an important approach route to the inner city.
Here the Municipality of Deventer has aspired to develop a high-grade, inner urban housing area whilst preserving the characteristic culture-historical elements. Some of the qualities which had to be enhanced here were, being able to live in the historical inner city, the area alongside the ramparts and having a direct relationship with the water. In addition, the remediation issues of the area had to be resolved. In 1995 MTD landschapsarchitecten was commissioned by HanzeWonen to draw up an urban design plan and a development plan for the public space.

the design
Aside from the preservation of the historical pattern of streets, the first strategic objective of the urban design plan was to preserve a number of industrial buildings; the laboratory, three warehouses, a small row of 'working class' houses, the ink factory and two substantial chimneys will be given a new function which fits in with the new housing area. Here one of the warehouses will accommodate the Provincial Archaeological Service department. In terms of size and scale, the newly introduced residential buildings are related to the warehouses.

As far as possible, the parking across the entire housing area has been resolved below the residential buildings, with only a few places for visitor's parking at street level. Because of the remediation issues this could only be excavated to a depth of 1.5 metres; the new residential buildings are therefore half-raised.

The second objective in the urban design plan is the enhancement of an emphatic coherence between the residential buildings and the public space on the one hand, and the water and the fortifications on the other hand. The former bastion has been brought back, and halfway up Bergpoortstraat a new small plaza has been created along the water whereby new views across the inner city canal have come about. On the southern side of the plan the edging along Buitengracht has been tidied up and made accessible to the public again.

For the streets in the plan it was decided to use a plain, stone profile with baked materials, in which trees have structurally been introduced. In Bergpoortstraat the historical railway tracks have also been preserved; they're positioned in a strip of cobblestones.

On the northern side of the plan a small neighbourhood park has been created. The open area provides space for all kinds of uses; the area is a grassy patch surrounded by a raised seating edge, and around all of this is a small asphalt skating rink. 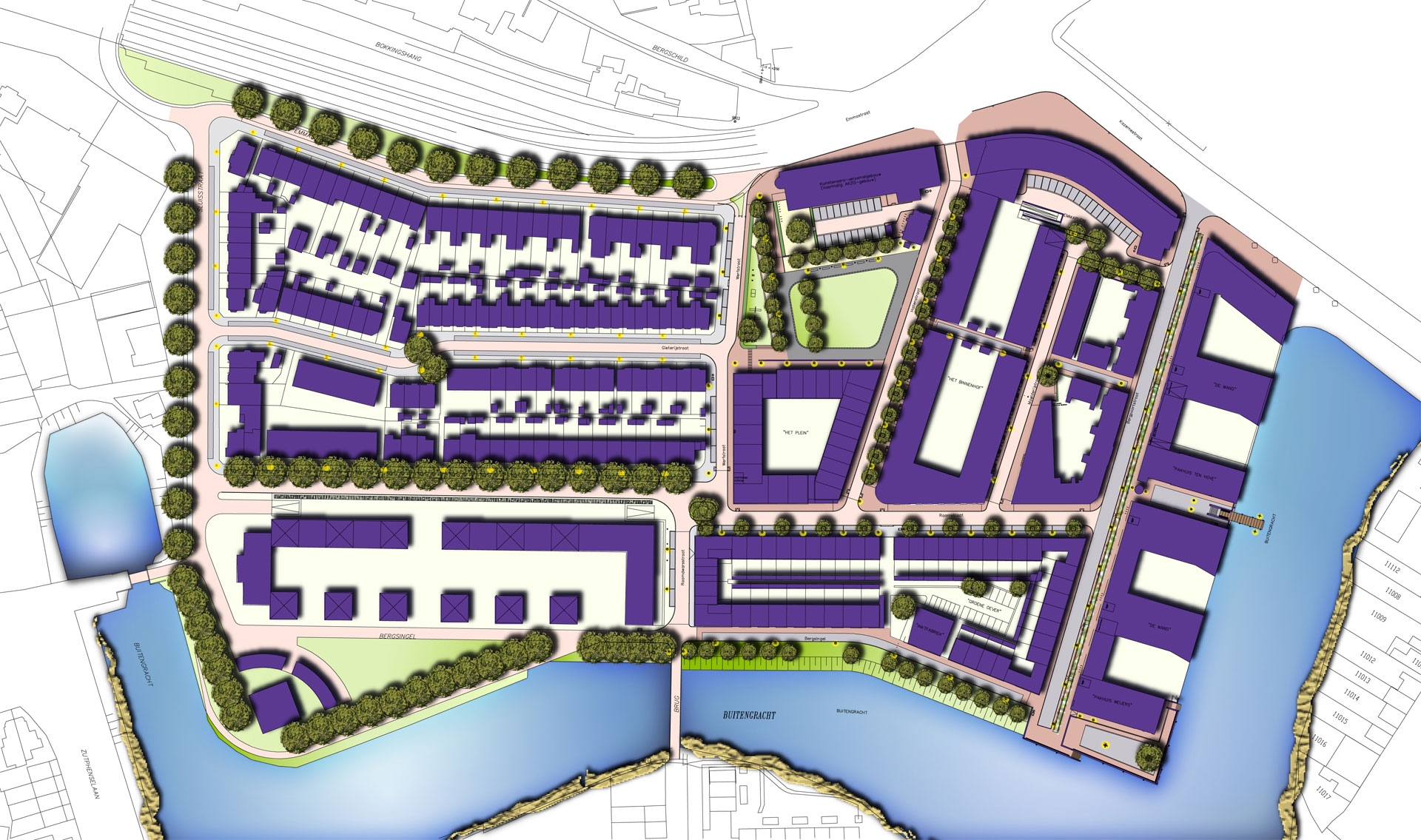