village with an urban stature

Venray has a ‘rich’ culture-historical past and from its positioning along the A73, it plays a prominent role in the region of North Limburg in terms of living, working, shopping, culture and tourism. Urban developments within the central city area of Venray have led to a scale enlargement and an ambivalent character; the village-like character of the historical part is combined with the more urban character of the new infills and expansions. Besides, the layout of the public space hadn't kept up with these developments; hard surfacing and street furnishings were worn and out-dated.
In 2007 MTD landschapsarchitecten was commissioned to draw up a development plan, an image quality plan and the building specification preparations of the public space in the city centre, and for the organising and supervising of the related communications process. The municipality as well as the entrepreneurs and residents involved had great ambitions; to ‘upgrade’ the public space and to make a recognisable new image of the city centre; a ‘village-like character with an urban stature’.

The first challenge in the redevelopment of the city centre of Venray was to bring about a differentiation amongst the ‘historical’ streets and squares, such as the Grote Markt and Henseniusplein, and the streets and squares which belong to the recent urban developments, Schouwburgplein and ‘Bleek’. The materials used for both subareas are the same; baked clinkers and grey-green granite, yet this has been laid differently in the cross sectional profile. In the historical streets the stone ‘plinths’ along the façades refer to the pavements as they were in the olden days, whereas in the ‘new’ streets the natural stone in the shape of a ‘runner’ has been laid right down the middle of the street.
For the historical squares a choice was made for roughly-hewn cobblestones, whereas the Schouwburgplein has been paved with baked clinkers. The latter square moreover, has been provided with a fountain and special lighting columns, which enhances the image of the square as an entrance and an area for terraces at the theatre.

The trees that have been introduced in the squares restore the original spatial effects in the city centre and give them a character of being shady with lots of atmosphere. In this, the Grote Markt mainly lends itself to being meant as a restaurant plaza and Schouwburgplein and Henseniusplein as the market and events squares.

The lighting columns, sitting benches and marking posts which have been specially designed for Venray, boost the unique ‘look’ of the city centre.
A second challenge in the layout of the public space was to organise the awnings and the advertising shown along the façades. This has resulted in the city centre of Venray undergoing a true metamorphosis and achieving a greater atmosphere and identity. 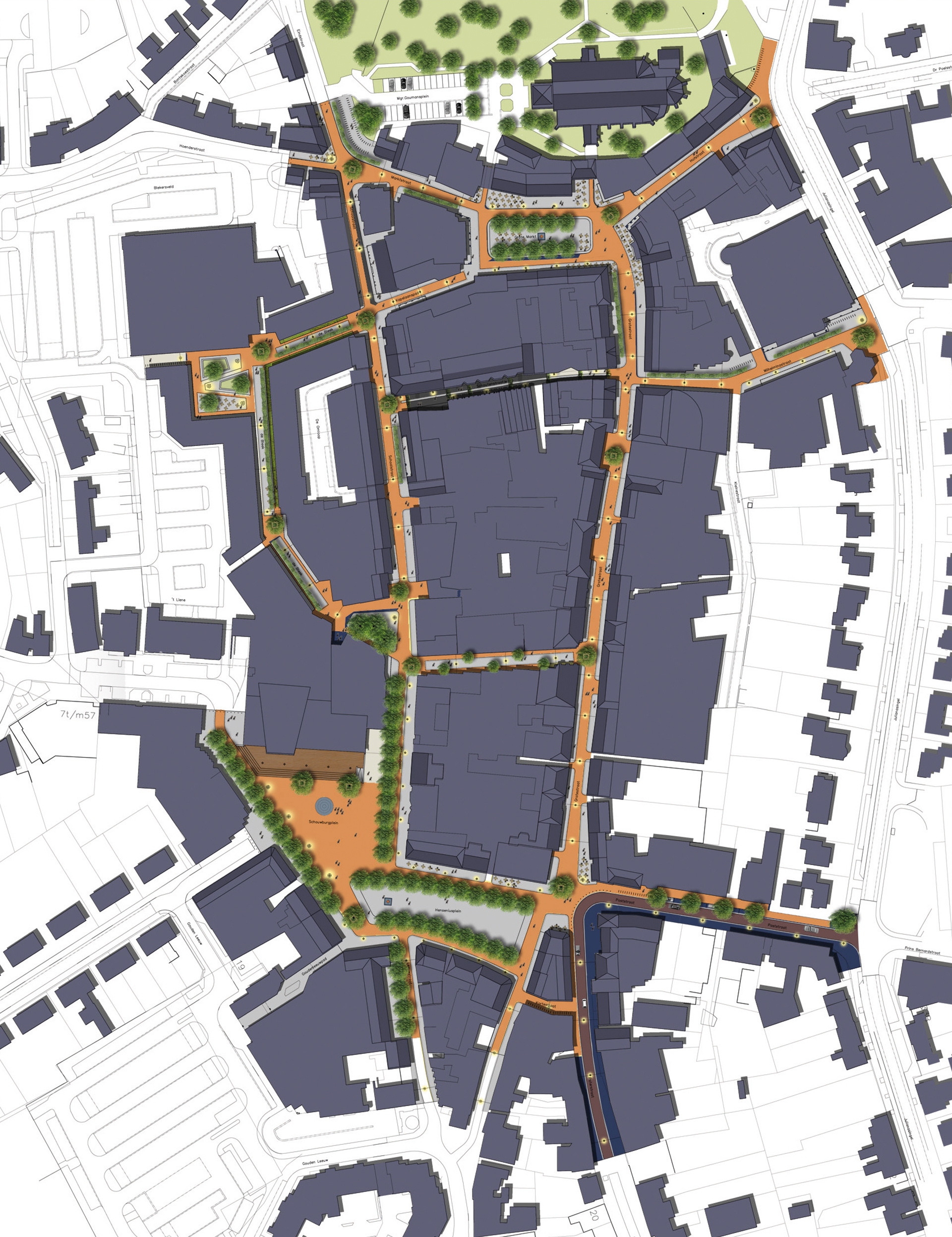