The woods of the city of Amsterdam measure about 10 square kilometres and are situated on the south-western fringe of the city. The functionalistic schedule of the German public parklands is integrated in the design with style elements from the English landscaping style; the alternation of open and closed spaces, the flowing lines, undulating slopes, separated systems of pathways for hikers, bikers, horses and vehicles, along which changing scenes are arranged and constructional elements have incidentally been applied. To a large degree the expansive collection of impressive bridges contributes to the identity and the spatial image.
Since 1998 MTD landschapsarchitecten has acted as a consultant to the Amsterdam Dienst Advies en Beheer (DAB formerly Amsterdam Dienst Beheer) for the Amsterdamse Bos [woods], and was initially commissioned to draw up an inventory, analysis and evaluation of the 116 numbered bridges as well as the design of a new woods bridge.

the design
In order to obtain a careful evaluation of the bridges in the Amsterdamse Bos, the value of the landscape and its perception was described and charted on 3 scale levels; the calibre of the woods; the bridge in its direct surroundings; and the bridge as a structural engineering object. Then the bridges were qualified as being valuable or not.
An exceptional part of the collection of bridges is made up by 67 bridges which were designed by the architect Piet Kramer between 1937 and 1945. The bridges, considered to be in the style of the Amsterdam School, are recognizable by their craftsmanship in design and detailing; a plain basic shape with clear eastern influences, the application of rounding and vaulted planes and a careful use of colour. In an architecture-historical sense the individuality of the separate designs makes the collection a unique and extremely valuable phenomenon. This has led to a nomination and ranking of this collection of bridges as national monuments. Aside from the appraisal, this monumental status has also led to a flow of funds for the restoration.
On the basis of the evaluation of the bridges, recommendations have been made regarding the maintenance, the full or partial replacement of bridges and the spatial fitting-in into their immediate environment. In view of this, a concept was also developed for a new woods bridge with a contemporary and a low maintenance design and which refers to the jargon of the Amsterdam School; an elegantly arched steel bridge with a timber deck and sculptural details. The 4 wooden intermediate supports have been extended as small columns and mark the bridge on both sides with their steel heads.
The bridge can be realised in different lengths and heights with a varying number of uprights and having various purposes of the roadway for hikers, bikers, riders and vehicles. 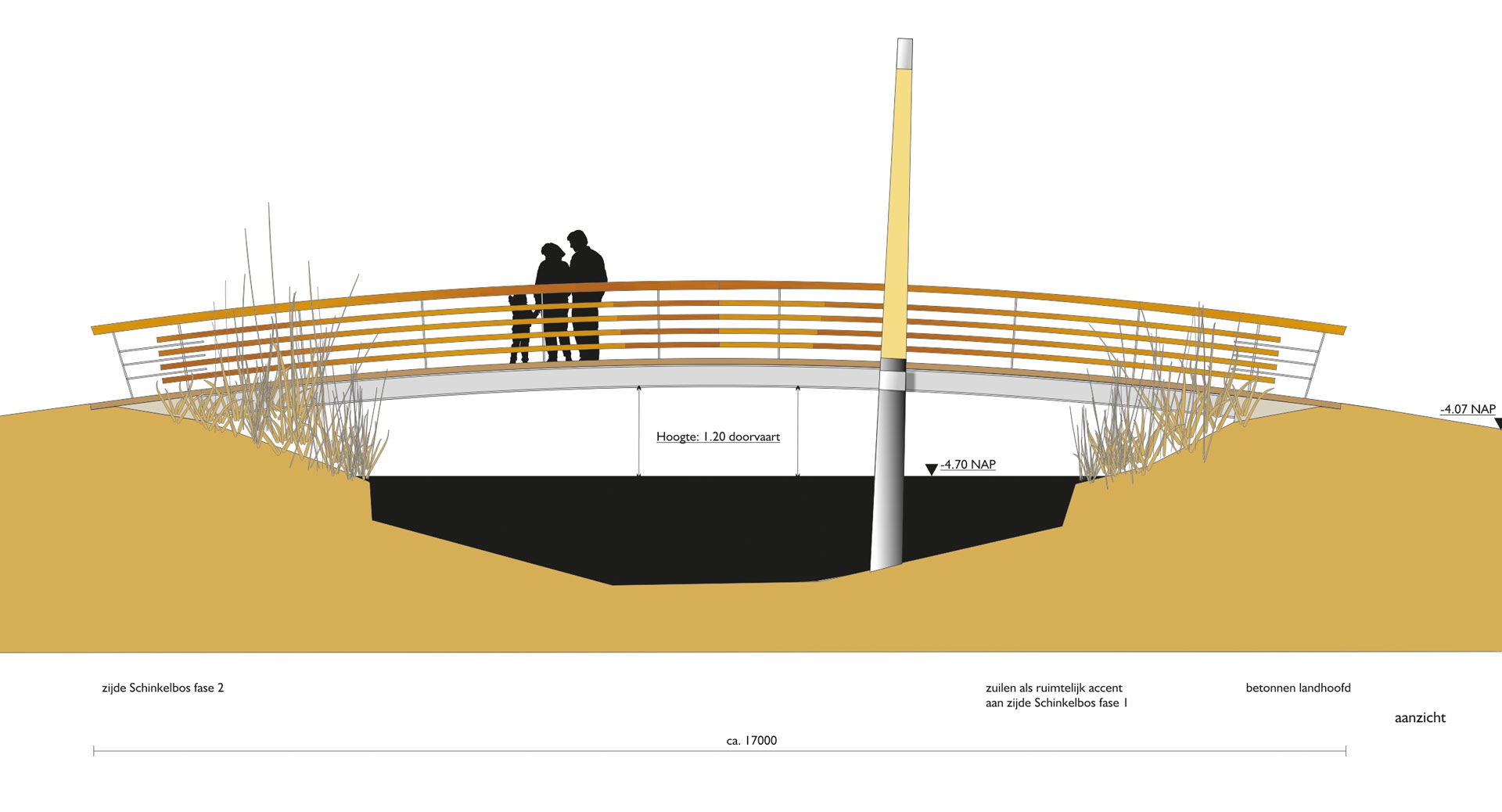 doosnede
Cookie Consent
This website uses cookies to improve the site, match ads to your interests and integrate with social media possible. This makes the site more user-friendly and provides you with better service. If you want to allow cookies you can change your settings.
More information is available in our Cookie Statement . If you want to use the full functionality of this website click Accept cookies.