high-grade health care at the edge of the city

On the south-western periphery of ’s-Hertogenbosch, bordering directly onto the nature conservation area of Gement, a large, innovative and welcoming hospital complex has been developed. The main urban design set-up of the hospital can be described as a few north-south oriented building volumes which have most of their orientation directed towards the adjoining landscape.
In close cooperation with EGM architecten, MTD landschapsarchitecten was commissioned in 2003 to draw up a landscape and urban development plan for the structure and layout of the surroundings of Jeroen Bosch Hospital. The main aim was to design the meeting up between the city and Gement on a structural level and to provide an appealing and healing care environment on a landscaping level. This care environment has the function of an ornamental garden as seen from the hospital building and of a garden to be used by patients, visitors and personnel. Here attention was especially paid to the organisation and handling of complicated traffic flows and the parking area. MTD landschapsarchitecten was responsible for the entire trajectory of the design, implementation preparation, calls for tender and the supervision during the execution.

the design
The first strategic aim of the plans was to direct the access to and the orientation of the main entrance to Jeroen Bosch Hospital towards the city and the bypass; the Paleiskwartier and the Willemspoort. On this side an entrance plaza was designed with lots of space for greenery and places to laze about. Here the handling of the flows of cars, taxis, public transport and pedestrians from and to the parking garage was incorporated in a safe and effective manner, without it being at the expense of the desired image quality of the square. This is created by way of introducing a series of raised grass islands with trees of heaven (genus Ailanthus altissima), fancy designer seating and lighting columns, a fountain and a number of artistic objects.
The second strategic aim of the plans is to strengthen the positioning of the Jeroen Bosch Hospital and to make it recognisable in the transition area between city and landscape. In order to achieve this on the southern side of the hospital grounds, a natural park landscape with flower meadows, a water feature, undulating reed banks and footpaths have been designed, which link up with Gement. The areas between the building volumes distinguish themselves by means of an entirely unique, more cultural planting and layout. Hence numerous possibilities are created for a natural and seasonal experience and orientation within the large complex of buildings. 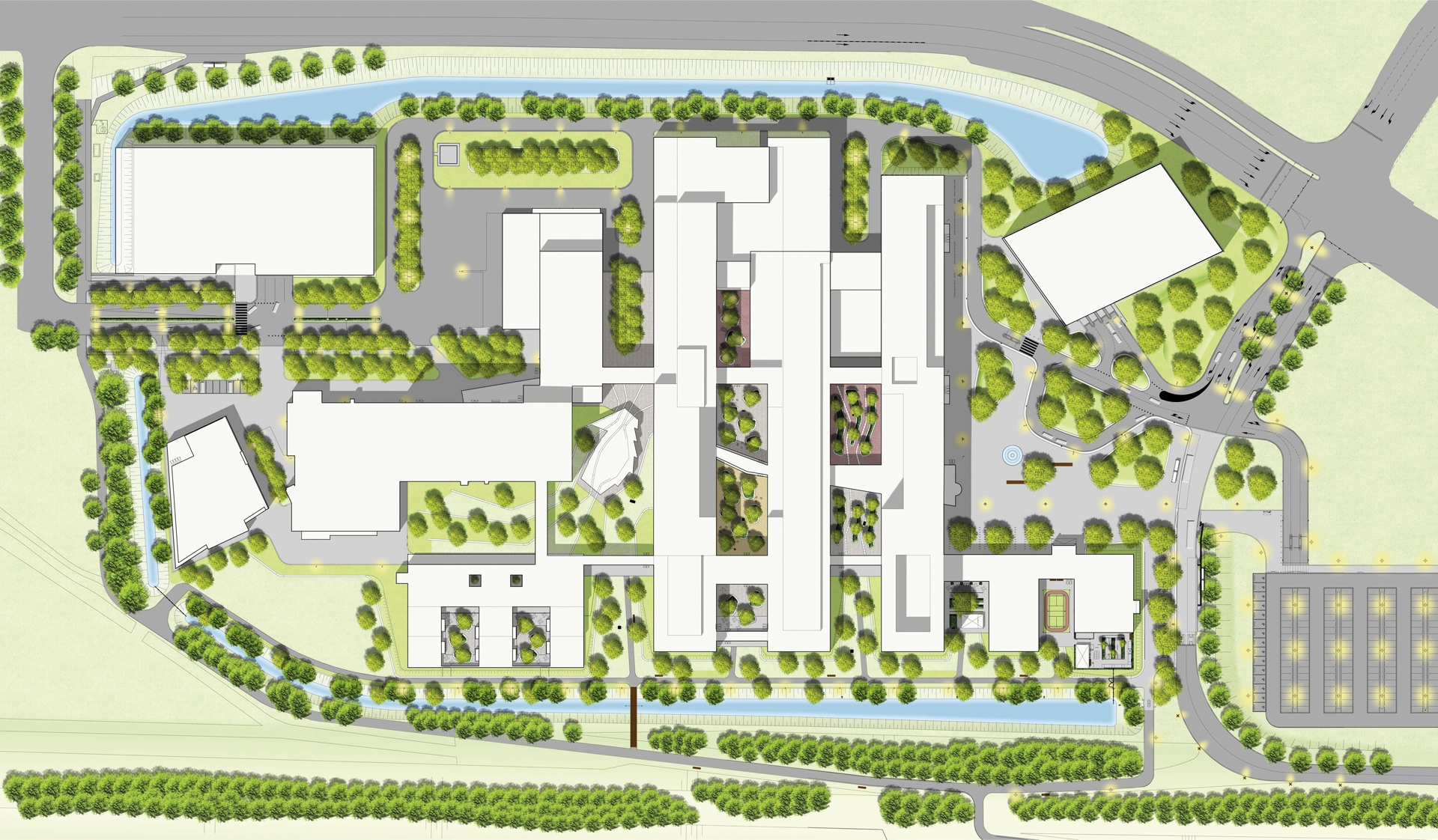