new route from the rampart to the inner city

In the rampart zone of ’s-Hertogenbosch a number of large spatial developments are being investigated. The most extensive plan is an underground parking facility which was initiated by the municipality. The fortifications have been designated as being a municipal archaeological monument and in view of this, not only will the visible portions of the wall and bulwarks be preserved, but also the areas within the field of fire which have traditionally been kept open.
At the end of 2008 MTD landschapsarchitecten was commissioned to draw up an image quality plan for the Zuiderpark, the rampart zone and the Casinotuin in which the main intention was to set out a spatial framework for the developments. To this end the choice was made for a comprehensive approach in the architecture, the public space and the works of art in the public space.

the design
The first strategic objective of the image quality plan was the restoration of the rampart and for the re-establishment of the excursion along the wall, under the leafy roof of the impressive trees. As part of the city excursion the bastions are rather special places; their culture-historical importance as part of the defences and in terms of their modern-day purpose as look-out point. In relation to this, in the Zuiderpark the adjoining area at the base of the wall will be cleared of all undesirable obstacles and the BTC de Pettelaer tennis complex will be relocated to a new spot in the park. The inner city canal will be revamped and the parking garage for 1,100 extra inner-city parking places will be situated underneath the canal. The entrance to and exit from the parking garage will be situated on the Baselaar bastion with a direct connection onto Hekellaan. This new purpose for the bastion will be enhanced by introducing a catering pavilion. This will boost the central positioning of the bastion and its special meaning as an intersection in the excursion across the ramparts.
The second strategic objective of the image quality plan involves the realisation of an attractive and unambiguous link up from the parking garage through the Casinotuin in the direction of the inner city. From Limietlaan there will be a new connecting line projected over the city canal, under Hekellaan and like a wedged access ramp through the Casinotuin. The former Judastoren (tower) will be given a certain importance in this connecting route; here the underpass will be situated under Hekellaan and via the tower one ascends from the medieval level at the base of the wall to the level of Hekellaan.
For the Casinotuin the objective of the image quality plan was mainly directed towards the preservation and enhancement of the impressive, historical stock of trees and the bowl-shaped positioning of the small park along the city walls. Here it is proposed to reposition the works of art which are spread throughout the rampart zone.

The rampant zone is the winner of the ESPA Gold Award and has been nominated for the Schreuder price. 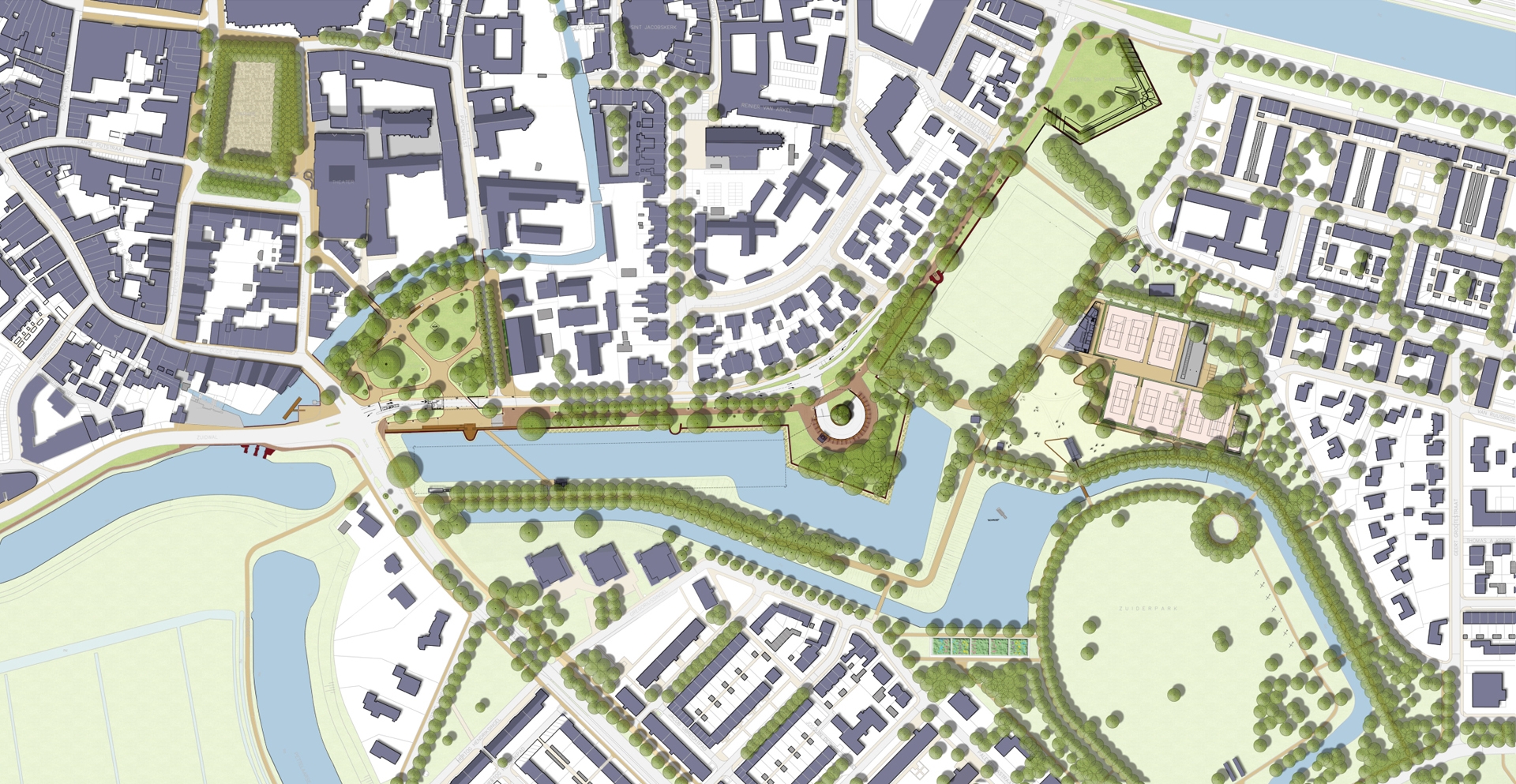