With the expansion of the NoordBrabants Museum and the new building for the Stedelijk Museum (SM's) a new cultural center in the city of 's-Hertogenbosch is created; the Museum Quarter. The entrance squares hereby form an important link between the Museumkwartier and the public space of the city center. In early 2006, MTD landscape architects / urban designers was commissioned by the province of Noord Brabant to produce a design for the entrance squares and courtyards of both museums. It was followed up in 2014 with a commission to design a boarding area to the Binnendieze. MTD worked in close collaboration with BiermanHenket architecten who developed the architectural plans for the expansion and construction of the museum on establishing an integral design.

The image of the entrance square of the Noordbrabants Museum on the Verwersstraat has remained unchanged for the most part. The main entrance however has a more gained a more symmetrical design with a central staircase and ramps on both sides. At the monumental entrance gate, hedge blocks have been introduced together with a robust stone element carrying the name of the museum.
The entrance square of the SM'S, on the other side of the Museum Quarter, has received a more contemporary look in line with the architecture of the new building.
The museum restaurant and the central museum garden form the heart of the museum district and are an important link between the NoordBrabants Museum and SM'S. The aim for the new museum garden was to maintain the defining elements of the original design (MTD landscape architects / urban designers; 1997); the undulating lawn, the vaulted ivy field and its monumental trees. Also the restaurant’s terrace has been maintained. From this side, beautiful views are created of the sculpture collection displayed in the greenery.
A new ingredient for the museum garden is that it is bounded on four sides by museum buildings; the glass walkway between the NoordBrabants Museum and SM'S constitutes an architectural response to the transparent gallery of Quist on the other side.
More or less hidden places now form the new patio gardens within the Museum Quarter; the green patio, directly adjacent to the museum restaurant, and the more stony patio at the Waterstraat that provides access to the museum restaurant in the evenings.
The departure point in the Binnendieze forms a new element in the Museum Quarter. It’s inspired by the map image from 1629, and positioned on the north side of the entrance square onto the Waterstraat. The garage that was built here over the Binnendieze was demolished and the waterway was dug open again. A new stone staircase leading from the water level up to the Waterstraat has been introduced. Upon construction of the boarding area, remains of the original staircase, which was originally located here, together with arches from the Loefse Bridge over the Waterstraat turned out to be still present. They have been preserved and restored. Immediately adjacent to the boarding area, a new square has been introduced. From here one can access the entrance square of the NoordBrabants Museum through a white gate. On the square a long stone bench has been introduced and in the floor a specially crafted engraving of the map image from 1629.
With the realization of the design for the squares and patios, the Museum Quarter has received a renewed and strong relationship with the public space and waterways of the historic city centre of 's-Hertogenbosch. 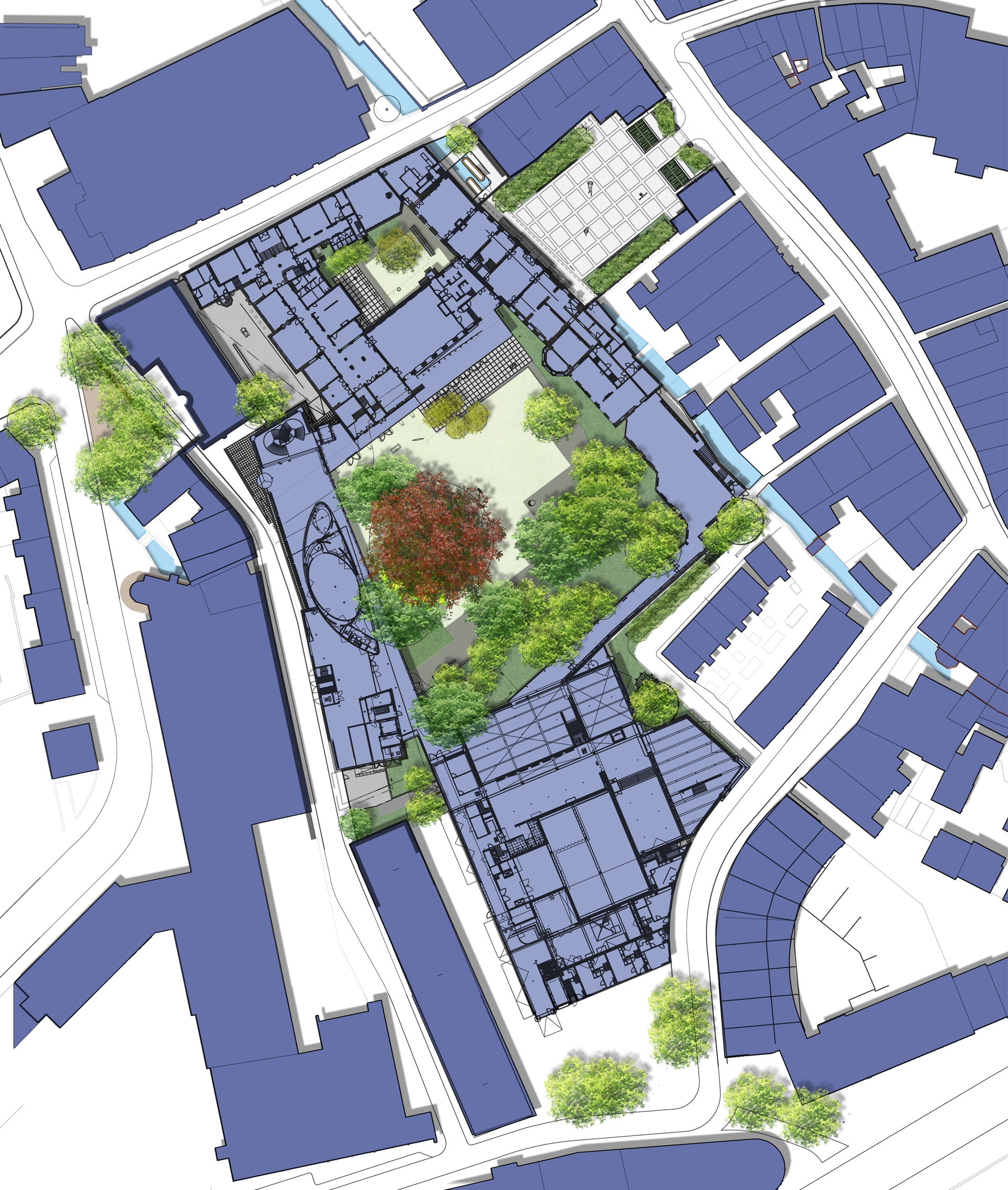