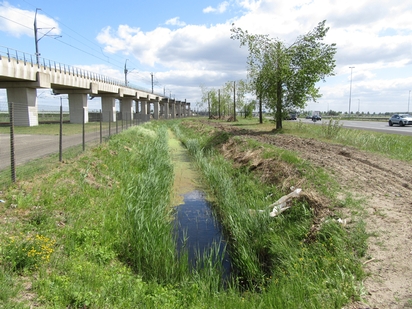 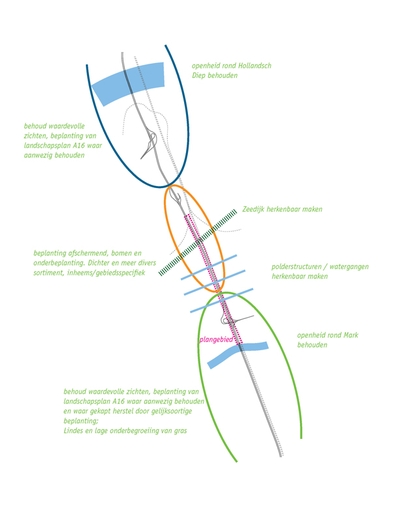 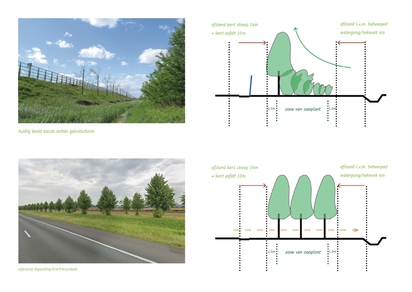 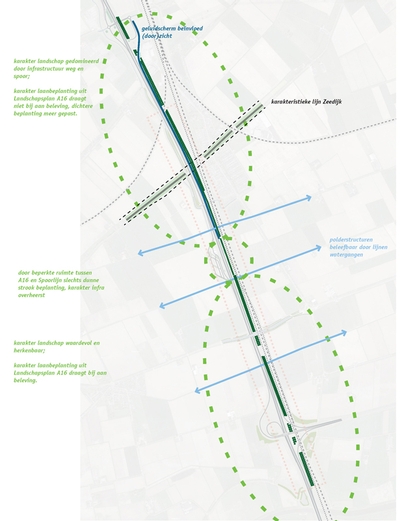 MTD landscape architects was commissioned by Rijkswaterstaat South Netherlands to draw up a development plan and planting plan for a new forest between the A16 and the High Speed Line (HSL) near Zevenbergschen Hoek. The main goal is to develop a future-proof, sustainable and low-maintenance natural forest, which is largely based on the existing landscape and cultural-historical qualities.
The present poplar forest was a recognizable landscape structure on the spot. However, due to poor growing conditions, the poplars were a danger to the HSL and had to be cut down.

A structural design was initially drawn up on the basis of an analysis of the soil conditions, the visual and spatial aspects and the relevant local policy. Within the structural design, the main lines for the appearance and the assortment of the new forest to be planted have been established in relation to the HSL route. A distinction has been made between the different zones through which the route passes .; the zone of the Hollandsch Diep with its characteristic openness, the zone of the infrastructure bundle of A16 and HSL and finally the zone of the Mark and Prinsenbeek, characterized by planting structures and existing views. In the zone of the infrastructure bundle, a sustainably managed and future-proof range of plants has been chosen with as little human intervention as possible. Natural processes such as succession and natural storage and death can run freely here. This also enhances the ecological qualities. In the zone of the Mark and Prinsenbeek, efforts have been made to alternate tree meadows and open views, so that the characteristic landscape image remains recognizable.
The structural design for the individual zones was translated into a range of plants, which were discussed in workshops with relevant experts from Rijkswaterstaat. Proposals have been worked out in this regard, which result in a coherent picture for the entire route and a planting principle for the plan area. This planting principle was then elaborated into a target image, planting plan and plant list. The expected management, the ecological potential, the preconditions for realization and a global cost estimate were also drawn up, on the basis of which a contractor can be selected.
In the autumn of 2021, IDverde will start laying the sustainable planting structure. MTD landscape architects will follow the development of the forest with particular interest.