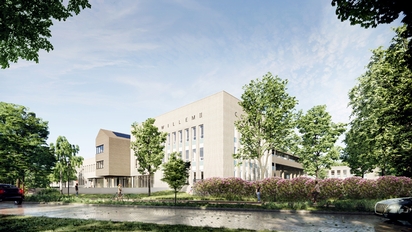 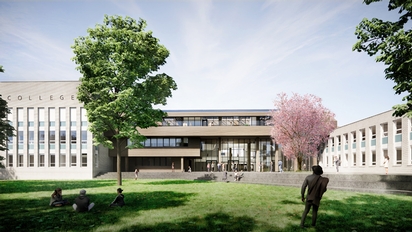 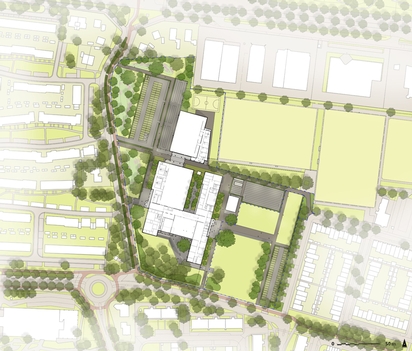 Commissioned by and in collaboration with EN | EN architects, MTD Landscape Architects has drawn up a design for the sites around the new building of the Koning Willem II College in Tilburg. The aim of the plans is to fit the all-sided building into its landscape context as much as possible and to preserve the existing green qualities as much as possible. The grounds around Koning Willem II College have an orthogonal main design and are functional in line with the building and its surroundings. The concrete connection with the urban context arises through the (semi) public bicycle route. In addition to the existing bicycle connections from the surrounding neighborhoods, this cycle path provides access to both bicycle parking facilities. The parking facility for cars is also directly related to the various entrances to the school building and the sports hall via a system of orthogonal connections.
Entrances and lounges are differentiated by the use of high-quality materials.

The existing plants will be expanded where possible. The green rooms, which are created in this way, have a functional function in addition to an aesthetic. For example, one of the green rooms is given a meaning for collecting, purifying and delayed infiltration of the rainwater, one green room is given a meaning as an extension of the schoolyard and one field serves as a place for small events and a connection with the neighborhood. The existing tree stock is largely retained and supplemented, with the starting point of strengthening a natural image and increasing biodiversity. The planting plan focuses on a sustainable and indigenous range; trees and perennials that contribute to a climate-proof school site. Another important starting point is to enhance the experience of the seasons. Through a varied assortment of trees, shrubs and perennials, a rich variety of (autumn) color, flowering time and texture is created throughout the year.