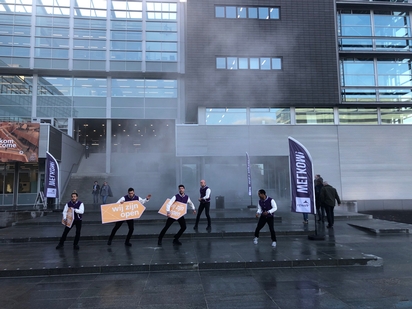 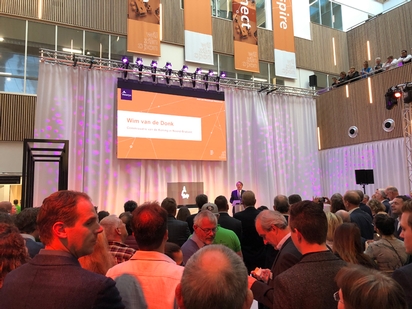 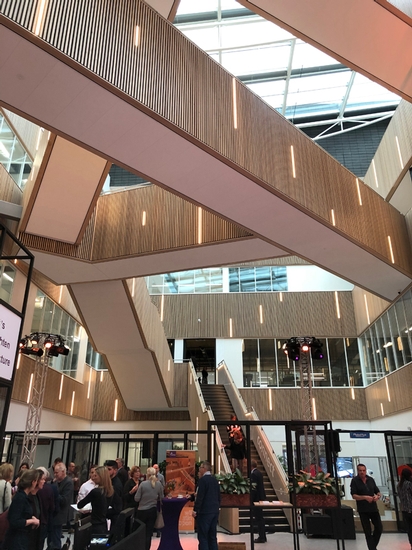 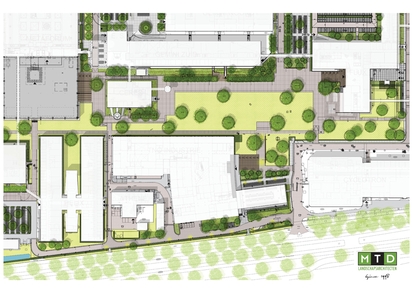 On Thursday 7 November, the new building of the Fontys Hogescholen was opened on the campus of the TU/e in Eindhoven. The King's Commissioner, Wim van de Donk, carried out the official opening act with the slogan "we are open". A slogan that symbolizes the numerous coalitions of Fontys University of Applied Sciences and the character of both the study programs and the building itself.
In the program of the festive opening there was room for speeches by various board members of the Fontys Hogeschool, the TU/e and the network of companies at Brainport Eindhoven. The name of the new building was also revealed; Nexus. Nexus stands for 'connection' in Latin and therefore for the ambition that Fontys has with the new building for the three institutes of the Technology & Innovation department. In addition, the name ties in with the naming of the other buildings on the TU/e campus.
On the occasion of the opening, the students of the various study programs gave tours and demonstrations of the different study programs and disciplines that are housed within the Fontys University of Applied Sciences.

The building, which was created by the transformation of the former TNO building De Rondom, has undergone a thorough renovation to the design of architects En En. The plans were realized by Build2Learn, a building combination from Heerkens van Bavel / Berghege. EGM architects further elaborated the architectural design during this implementation phase.
MTD landscape architects has been involved in the renovation and fitting-in of the building from the first developments as the author of the design plan for the Green Carpet of the TU/e. The office drew up the layout plan for the outdoor space and integrated the new building into the landscape of the Green Carpet. This makes it part of the campus and creates a literal cohesion between the educational institutions.
In the immediate vicinity of the building, this was done by extending the Green Carpet in terms of elements and materials to the new entrance of Nexus. This entrance was then designed as a broad natural stone grandstand with connections to the Groene Loper.
A green residential area has been created around the building for Fontys students. This gives them their own place, which is explicitly part of the TU/e campus. In addition, space has been created for bicycle parking.
In addition to the design and preparation of the sites, the activities of the office concerned the supervision of the implementation, which was handled by T&G Terrein and Groenvoorziening.
After all greenery has been planted at the beginning of next year, the integration of the Nexus building within the campus will be completed.

With the realization of the new construction and the layout of the grounds, an inspiring environment has been created for the rapidly growing number of Fontys engineering students to study, research and learn together. In addition to the students of the Fontys, doors from Nexus are also open to students from the TU / e and the business world!