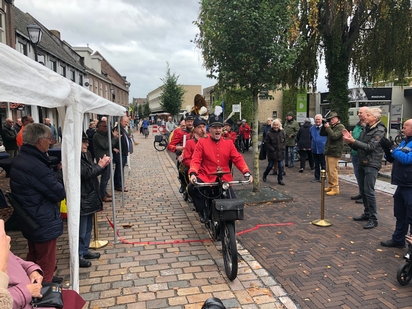 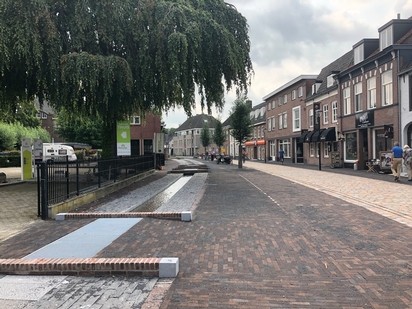 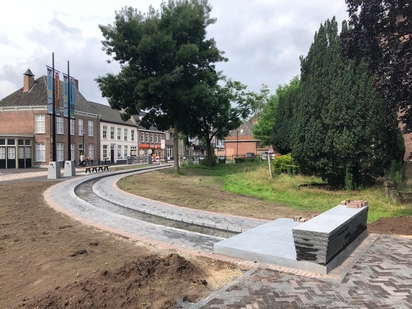 Under the watchful eye of many interested parties, the newly renovated Rechterstraat in Boxtel was festively opened at the end of October. With this, another project has been realized within the ambitious Center Vision 'Binnen de Bruggen', as drawn up by MTD landscape architects on behalf of the municipality of Boxtel.

The redevelopment of the Rechterstraat aims to further enhance the historic character of the core of Boxtel and thus ties in with the previously realized Cultural-historic axis. The chosen material, the so-called Italian porphyry, has created a contemporary streetscape that refers to the historical profile and with which the facades come into their own much better. Perhaps the most important intervention is to bring back and make the historic Binnendommel visible by introducing a narrow water stream and bridges. In places where the latter was not possible, specially processed natural stone in the pavement refers to the original Binnendommel.
The Rechterstraat has been made greener because black alder trees have been placed on prominent points. With their 'water-related' character, they enhance the image of the Dommel in the center of Boxtel.
The introduction of banner masts specially designed for Boxtel mark the 3 entrances to the historic Center of Boxtel Binnen de Bruggen.

MTD landscape architects drew up the development plan for the Rechterstraat on behalf of the municipality of Boxtel, in collaboration with the Rechterstraat working group. In addition, the implementation preparation, tendering and aesthetic supervision were also the responsibility of MTD. The realization by contractor Heijmans from Rosmalen started in January and lasted about six months.