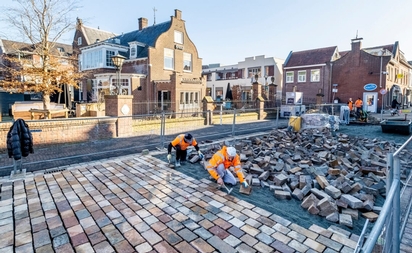 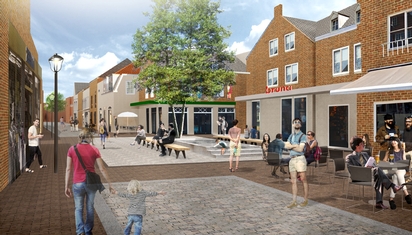 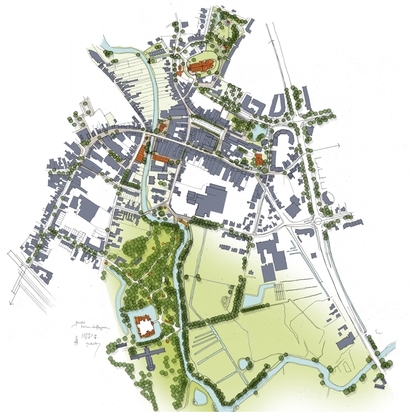 On January 25, 2021, the starting shot was given for the redevelopment of the Rechterstraat in Boxtel. The Rechterstraat is the first project to be realized in the context of the ambitious central vision "Boxtel Binnen de Bruggen", as drawn up by MTD landscape architects on behalf of the municipality of Boxtel.
In the coming months, the Rechterstraat will undergo a true metamorphosis, a long-cherished wish of many entrepreneurs, retailers and residents.
The first natural stone boulders have now been laid in the street profile on the Zwaanse Brug, the place where Boxtel once originated. Italian porphyry was chosen because it fits in nicely with the historic street scene of the Rechterstraat and can enhance it.

The Rechterstraat, also known as the economic axis of Boxtel, forms the original connection between Liège and Amsterdam (the current A2). On the small square at the Bruna, this is symbolized by an elevated plateau containing the historical map of Boxtel and a depiction of old coins, which represent the commercial spirit of the village.
The original Binnendommeltjes will also be returned to the center of Boxtel during the redesign. The introduction of specially processed natural stone makes the courses of these streams visible again and one of the streams is reopened in the vicinity of Villa Phaf. This contributes to climate-adaptative measures and a contribution to reducing heat stress in the core of Boxtel. In combination with the newly planted trees, the benches and the lighting fixtures, a high-quality and pleasant living environment is created in this important shopping axis in Boxtel.