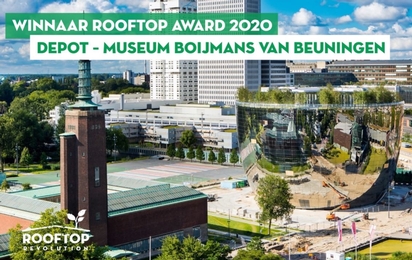 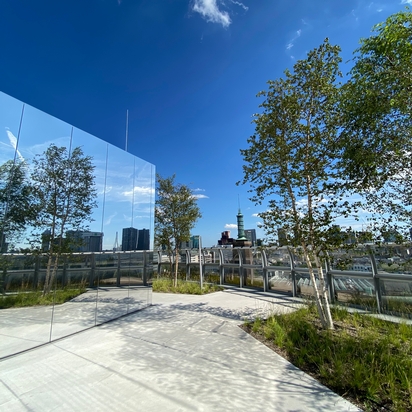 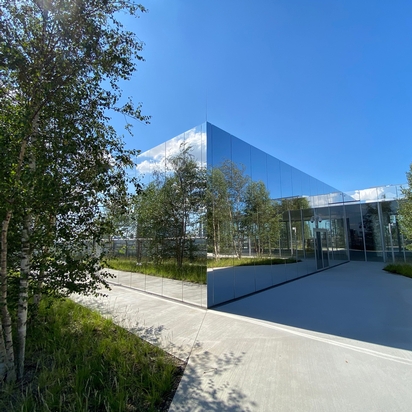 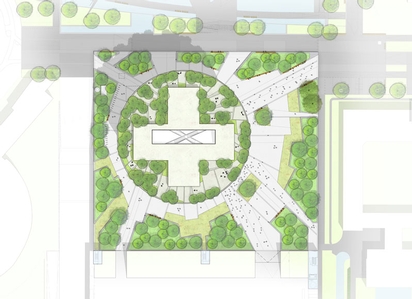 The rooftop forest of the Depot Boijmans Van Beuningen was awarded the Rooftop Award 2020 during the Rooftop Symposium in Capital C in Amsterdam on Friday 4 September. Sjarel Ex, director of Museum Boijmans Van Beuningen, Arjen Ketting, associate and architect at MVRDV, and Michiel van de Bunt, manager at ZinCo Benelux, received the Rooftop Award from Rooftop Diva Esther Wienese.
With the Rooftop Award, the Rooftop Revolution, organizer of the symposium and driving force behind the sustainable use of our roof landscape, wants to give ambitious 'roof innovators' a platform and show that much more can be done on our roofs. The roof forest on the depot is a wonderful example of this.
MTD landscape architects drew up the design in close collaboration with MVRDV, and also drew up the planting plan and the technology for the roof forest.

The jury, consisting of Margot Bleeker, director Erasmus MC Trustfonds, involved in the winning plan of 2018, Tim van Hattum, program leader Green Climate Solutions at Wageningen University Research, and Rooftop Diva Esther Wienese, author of The Rotterdam Rooftop Book, new use of roof and city, had the honor of choosing the winner from the seven nominees. They assessed the submissions on the criteria: Innovation, Inspiration, Public Accessibility, Visibility, Sustainability and Greenery and the State of the Roof Now, and almost unanimously chose the depot as the winner. Esther Wienese: "This year's Rooftop Award was for" the most eye-catching roof in the Netherlands ". That is Depot. The trees on the roof of the mirrored pot naturally draw attention to the surface. This building has everything it takes to raise awareness and inspire people to do more with their roof. "

The design for the roof landscape and the surroundings of the Depot focuses on an optimal integration of the building into its environment. A special public meeting place will be introduced around and on top of Boijmans van Beuningen's new Depot. The spectacular mirrored facade of the building reflects the green surroundings, making the visitor feel as if they are in a "forest room", where there is room for contemplation and events such as the Parade.
The surroundings of the Collection Building add a green forest world to the historically valuable Museum Park and give the depot its own identity. The plan with a shard structure extends from the forecourt to the roof landscape that is 32 meters higher, so that ground level and roof form one robust forest landscape. The carefully positioned shards form raised planting areas, drainage lines and benches and suggest that the depot has 'landed' here, as it were.
The vegetation of Pinus nigra, Betula pendula and forest vegetation is suitable for both the climatic conditions of the forecourt and the roof landscape and form one coherent ecosystem.