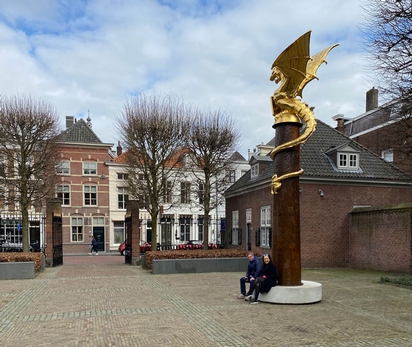 The Dragon Fountain is the most famous fountain in 's-Hertogenbosch. The fountain is located in the middle of the very busy intersection of Stationsweg and Koninginnenlaan, right in front of 's-Hertogenbosch station. The statue in the fountain represents a dragon.
In view of the redesign of the crossing and the restoration of the fountain and the plinth of the monumental Dragon, a temporary location was sought for the golden statue. This was found on the forecourt of the Noordbrabants Museum.
Last Monday the Dragon was lifted from its pedestal and moved to its new, temporary location on the forecourt of the Noordbrabants Museum.
MTD landscape architects was commissioned by the Noordbrabants Museum to design the location of the statue in the forecourt and the design of the temporary plinth.
It is planned that the redesign of the intersection of Stationsweg and Koninginnenlaan and the restoration of the fountain and plinth will be completed in May 2021 and that the Golden Dragon can return to its original location.

The statue of the Golden Dragon dates from 1903 and was the result of a competition organized by the municipality. Jonkheer Bosch van Drakesteijn, King's Commissioner in Noord-Brabant from 1856 to 1894, had entertained a bequest of 10,000 guilders to the municipality of 's-Hertogenbosch to establish a memorial to his twin daughters, who in 1781 at 17 age had died. A competition was organized for the memorial. The De Leeuw brothers from Nijmegen won the competition, but the dragon fountain was ultimately made after a design by the architect van 't Zand Jules Dony.
In 1959 the tunnel was built under the dragon. The tunnel connected the Koningsweg to Koningin Emmaplein, so that car traffic going from north to south, or vice versa, was not affected by other traffic to and from the station.
There are two stories that explain why the statue on the fountain is a dragon.
's-Hertogenbosch used to be, and still is partly, in a swamp area. The area surrounding the city was easy to flood and the city was therefore also called the Swamp Dragon and was considered an impregnable fortress. In 1629 Frederik wanted to conquer Hendrik 's-Hertogenbosch and he finally succeeded in this by grinding the area around the city.
Another story is that it is because of the last name of the legator. The dragon holds a shield with the family coat of arms of Bosch van Drakenstein.

One thing is certain: the Dragon has found a great new place in the forecourt of the Noordbrabants Museum and never seems to want to leave!