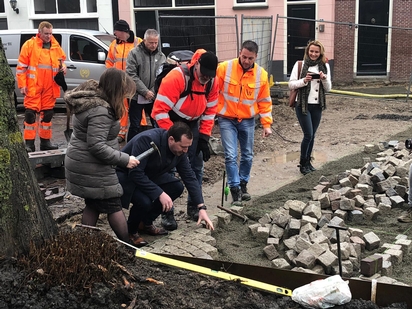 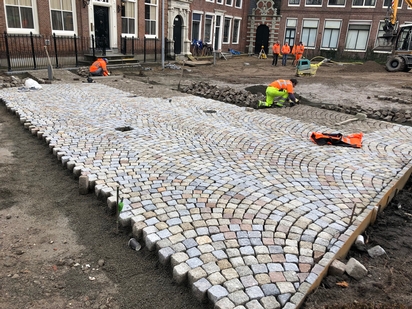 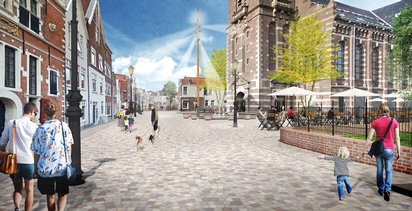 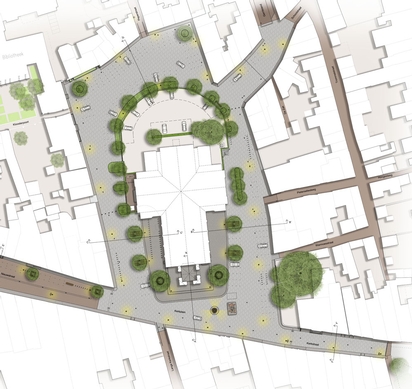 Just over a year and a half after MTD landscape architects presented the first sketches for the Kerkplein and its surroundings in Hoorn, the first cobblestones of the square floor were "put under the hammer" on Wednesday 26 February 2020 by Alderman Samir Bashara and Annet Kwantes.
The redesign of Kerkplein, Kerkstraat, Breestraat and Nieuwstraat represents a complete metamorphosis of this part of the center of Hoorn. It has taken shape within an intensive participation process, which has ended many years of discussion between residents, entrepreneurs and the board.

Kerkplein and its surroundings are historically an important place in the city center of Hoorn. Several churches have stood here over the centuries. However, with the disappearance of the ecclesiastical function, this place has become shattered. The design plan aims to give this place back the allure of yesteryear; inspired by historical photos and map images but with a new contemporary meaning as a city square for meeting and events.
New for Hoorn is the introduction of the Shared Space principle in this part of the city. This takes shape with a square floor materialized in Portuguese granite boulders. The place of the church is marked by a Belgian hard stone platform around the tower. This platform will also provide space for a terrace in front of the five-star hotel to be developed in the church.
The development plan emphasizes the greening of public space; a large number of trees have been introduced for this purpose. Even in the implementation preparation phase, places were still sought to plant additional trees.
The square is given allure by a special water element, in which three eras of churches can be depicted with different spray images, and furnishing elements specially designed for Hoorn. The lighting on the square has also received special attention with special light poles and the lighting of the striking buildings according to a lighting plan by I.P.V. Delft.
The project was prepared in a construction team with contractor Van Der Weerd from Graphorst, who commissioned specialist road workers from Portugal to carry out the street work at the request of MTD. The planning is aimed at having the Kerkplein ready in June. Nieuwstraat will be completed after the annual fair.
MTD is responsible for the design, implementation preparation and aesthetic supervision during the realization of the square. This guarantees the spatial quality and coherence with the design down to the smallest detail.