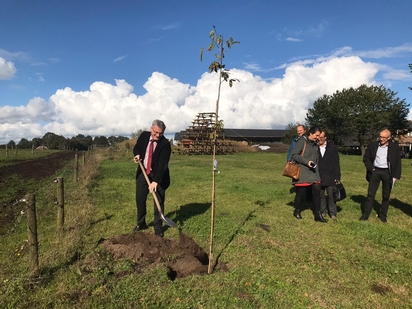 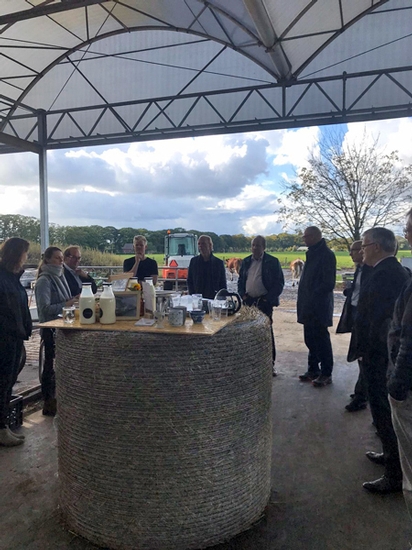 About a year after the submission of the final plans of Melk & Noot for the Brood en Spelen Competition, there was a special moment in the progress of the project last Thursday, October 3, 2019. Together with the Melkbrouwerij, MTD landscape architects was given the opportunity to give an update to the Board of Government Advisers, the Province of Overijssel and the Ministry of Agriculture, Nature and Food Quality regarding the progress of the project. In the cowshed of the Melkbrouwerij, just to the west of Lettele, the plans were presented with a view over the farmlands. The attendees were very enthusiastic about the plans and the first steps towards realization.

Melk & Noot is introducing a nature-inclusive agricultural system, within which a combination of wooded banks will be introduced for the Melkbrouwerij, providing edible fruits for cattle and strip grazing. This restores the historic small-scale nature of the existing camp landscape and creates a recreational attractive cultural landscape. In addition, the ecological values and biodiversity are strengthened and there is an increase in local products on the market. The plans not only focus on a change in the living environment in the short term, but also on a sustainable and healthy landscape for future generations.
After the presentation, the first tree was planted together with deputy Gert Harm ten Bolscher from the Province of Overijssel. A special moment; this walnut will become part of the system of food walls of the Melkbrouwerij.
It was a fertile day and an important step towards a healthier farming landscape!