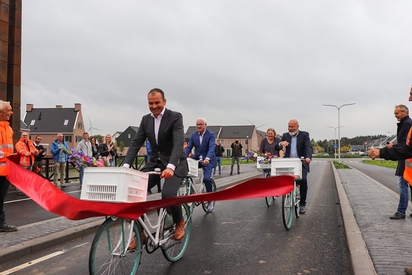 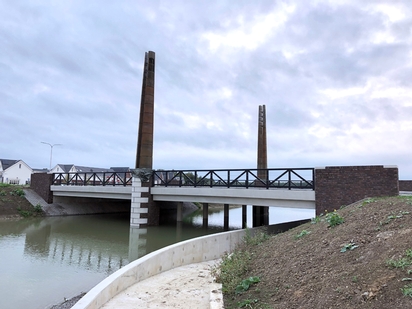 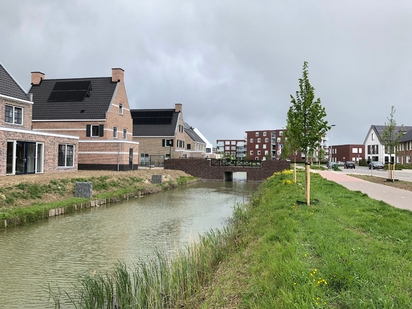 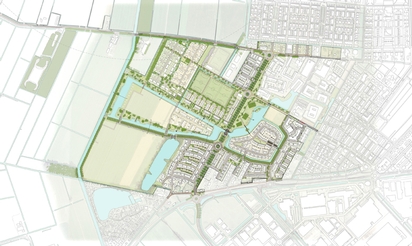 On Thursday 26 September 2019, the new bridge in the Laan to Parijsch in Culemborg was festively opened by Councilor Collin Stolwijk. All this followed shortly after the placement of two striking light columns on the bridge, with which it will form the iconic image carrier and entrance of the new Parisian residential area.
The lighting is a special detail of the light columns; every evening at 9.55 p.m., when the bell sounds in the city center, the light color in the columns changes from white to red. The porridge clock used to be a signal that the city gates were closing and a call for residents to come inside the gates of the fortified city of Culemborg, eat another plate of porridge and then go to bed.
The bridge in the Laan to Parijsch is part of a family of bridges and connects in terms of design to the New Dutch Waterline. Important starting points for the design are contextual. The bridge, for example, offers an underpass through which pedestrians can follow the adventurous walk through the neighborhood and pass the avenue at the water level.
The light columns form special accents on the bridge due to their design and detailing. They are materialized in corten steel, fitting with the cultural-historical context, and have a meaning as functional and aesthetic lighting elements; the LED light falls out via lasered cut outs that run in width and can be adjusted in color.

In February 2016, MTD landscape architects was commissioned by the CV Parijsch (municipality of Culemborg and Mourik Groot-Ammers BV) to prepare a main plan structure for the Parijsch Zuid district in Culemborg. starting points have always been sought in the wider context and the resulting "final image" of the residential area. In the first instance, this concerns the cohesion of the new residential area and the adjacent, unique landscape southwest of Culemborg. The new housing development of approximately 1350 homes on the west side of Culemborg forms the connecting link between the urban area of Culemborg and the adjacent landscape. Aspects that play a role in this include recreational routes, the experience of nature and cultural history (New Dutch Water Line) and bringing in greenery and water. The structure carriers are clearly defined in the plan; the North - South structures, which are directly related to the original structure of polders, quays and waterworks and the East - West oriented structures, which form a new layer of time. They offer optimum opportunities for use and experience. The ambition is to develop a solid and sustainable green structure. Structural elements that play a role here include the natural banks with high ecological values and the natural and easy-to-manage verges and robust avenues of trees. They determine the landscape character of Parijsch; Viewpoints, bridges, archeology and orchards add an experience or "adventure component" within the urban design, which makes Paris a particularly attractive residential location.