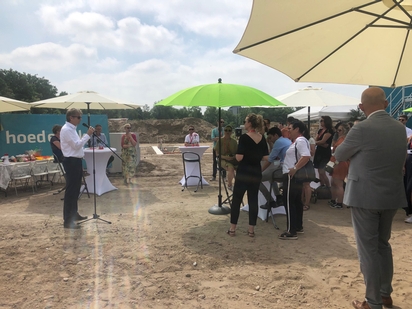 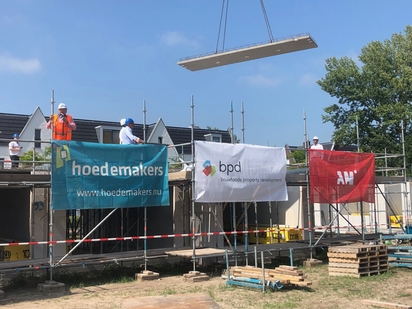 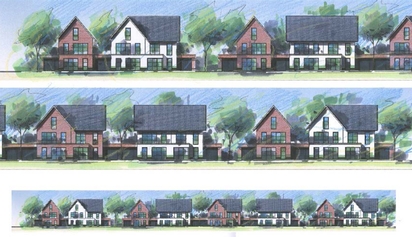 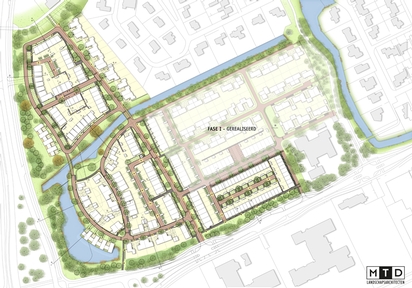 With the installation of a new storey floor in the block of social rental housing, alderman Roy Geers gave the go-ahead for the construction of a total of 63 homes in phase 2 of the Carolus on 26 June 2019. After a word from Jaap van Engelshoven and Roy van Geers, the future residents on this warm, sun-drenched Wednesday afternoon had the opportunity to raise their glass and take a look at their future home. It was also a perfect opportunity to get to know each other.
In addition to 44 owner-occupied properties, the plan includes a block with 19 social rental properties. It forms the second phase of a new residential area on the site of the former Carolus hospital. Phase 1 included 80 different types of homes; from townhouses with an area of ​​approximately 500 m³ to detached villas of approximately 940 m³.
The architectural design of the houses is by Mulleners & Mulleners architects.
Carolus can rightly call herself distinctive; the neighborhood has developed into a beautiful and leafy residential area. www.carolusdenbosch.nl

MTD landscape architects in 2007 initially received the commission from the three developing parties; AM Wonen, BPD and Slokker Vastgoed to draw up an urban development plan and a tree memorandum for the new residential area. Secondly, in 2011 the office was commissioned to update the urban development plan and to prepare a visual quality plan, a tree memorandum and a public space design plan.
The Carolus / de Herven plan area is in a strategic location in ‘s-Hertogenbosch; a short distance from the city center, within walking distance of the Prins Hendrikpark and the IJzeren Vrouw, opposite the new urban junction of Station-Oost and with a very direct access to the A2 highway. The transformation of the area into a new residential area was an opportunity to (re)discover the original identity of the place and to give it a (re)newed meaning. The landscape and urban development plan responds to this by taking the green-blue qualities of the area, consisting of a valuable tree stock and an east-west water feature, as the starting point. In line with this, the green peripheral zone has been strengthened and the water edge used as an important quality for living in the area. A prominent north-south connection has been introduced as an important structural support for the residential area; this "parkway" connects the entrance of the new residential area with the old, planted Hervensedijk. Parkway, water structure and green peripheral zone form two green rooms in which the houses are situated. They are optimally integrated into the landscape and orient themselves with regard to building lines and views of the green-blue structure carriers of the plan. There are, for example, the residences along the parkway that reinforce the backbone of the plan with a coherent architectural image and subtle linkage; the ground-level semi-detached houses and detached houses in the two green rooms, which fit in size and scale with the already realized houses of the 1st phase and the building blocks of the city houses, which form the transition between the ground-level houses in the green rooms and the green-blue zone and distinguish themselves from other residential buildings in terms of housing typology, volume and the way in which they are at ground level. They have a special and sculptural design and lie as solitary in the green-blue zone. The compact block with terraced houses also forms a special residential building that completes the 1st phase, east of the parkway.
The parking in the plan is organized at ground level; on three inner courtyards, a number of compact longitudinal and hook parking strips along the main residential streets and on its own lot. By strategically deploying the parking solutions, the parkway and the green-blue zone are kept as free as possible from parked cars.
For the architectural image, a contemporary translation of the Bossche style has been sought: brick architecture in warm tones and a careful and rich detailing with, for example, details of the entrance, window openings and roof finishes.