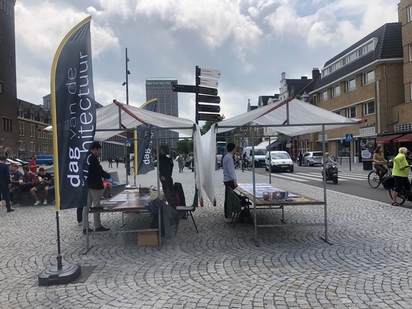 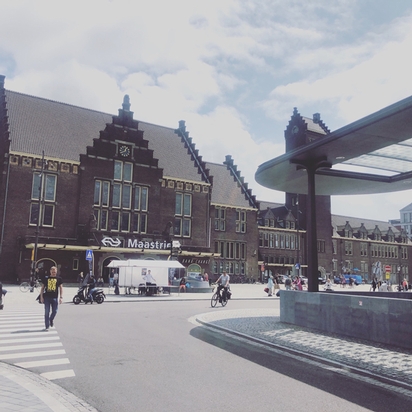 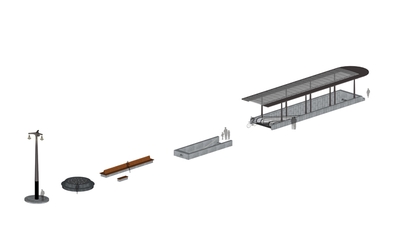 On Saturday 15 June 2019, as in many cities in the country, the Day of Architecture was organized in Maastricht. A few surprising building projects were accessible in the city, which were realized in the past year or will be delivered soon. Anyone interested in urban development and architecture could view these projects, take a tour and get an explanation of the design assignment, the architecture and the final realization of the projects. MTD landscape architects was present to welcome visitors to the Day of Architecture, to inform them and to exchange ideas about the layout plan of Station square and Percée and the design of the entrées of the underground bicycle parking on Station square.

At the start of 2015, the municipality of Maastricht commissioned MTD landscape architects to draw up a layout plan for Station square and Percée in Maastricht. An integral part of the assignment was the design for the entrances to the new bicycle parking facility under Station square. All this has been worked out in collaboration with Thomas Kemme architects. The offices took care of both the design and the technical and aesthetic supervision during implementation.
Simultaneously with the realization of the bicycle parking, Station square was given its provisional layout. The intention is that, after a final decision has been made about the bus station, the final layout of the Station square will be realized.
The deployment plan can be used to enlarge Station square, so that it again extends over the full width of the station building. Hereby the historic staircase is (re)introduced for the main entrance of the station, so that the building is firmly anchored with the square.
The second aim of the Development Plan is to create a representative square and entrance route from the Station to the city center, which can serve as a calling card for the city. The ambition here is to optimize the entrées and light void of the underground bicycle parking to a maximum.
The main entrance to the bicycle parking is situated in the central reservation of the Percée, which has regained its original purpose for strolling and residing under a canopy of trees. The main entrance to the bicycle shed marks the end of the Percée. It has been designed with two tapis roulants and a canopy. The roof consists of a steel cover with a light window with a slightly convex glass plate, supported by eight steel columns of approximately 5.5 meters in height. With regard to the main shape, they refer to the roof construction on the station platforms. The approximately 1.0 meter high parapets around the incision of the tapis roulants have a robust main shape and materialization in Belgian blue stone. The material continues into the walls on the inside, creating the desired vertical connection between the upper and lower world.
Just off the main entrance to the station building, a second entrance to the bicycle parking facility has been introduced on the square. This consists of a spacious Belgian Blue stone staircase and parapet.
Station square and Percée are materialized in light gray natural stone boulders in a segmental context. The staircase to the Station Building and the pavement around the staircase are specified in (burned) Belgian Blue stone tiles.
Two contemporary versions of the concrete lighting columns that originally stood here form important design elements on the final square. The 11-meter-high steel masts are presented on either side of the main entrance; more or less at the original location.

With the realization of the Development Plan for Station squaren and Percée, Maastricht has once again received a welcoming and representative entrance to the city!