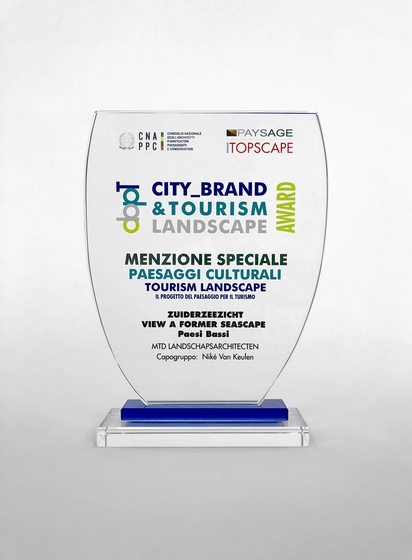 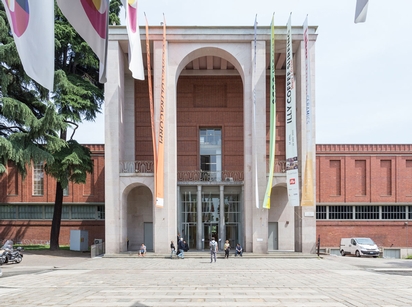 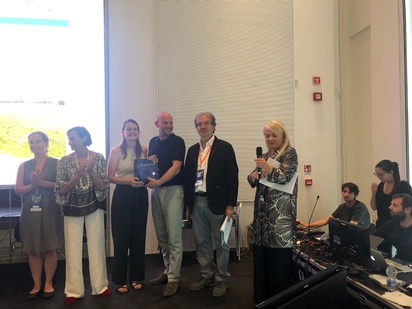 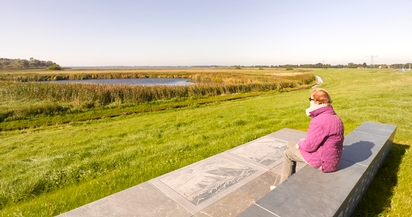 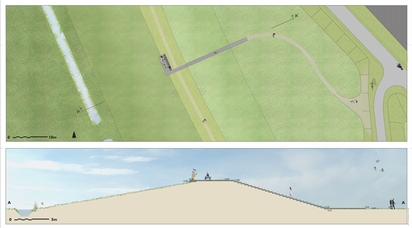 Last June 20, 2019, Charlotte van der Woude, on behalf of MTD landscape architects, received the City_Brand & Tourism Landscape Award during the Salone D’Ónore in the congress building in Milan for the project “Zuiderzeezicht” - a viewpoint on a former maritime landscape. The Award, which is awarded every three years by the Italian Paysage in collaboration with the Consiglio Nazionale Degli Architetti Pianificatori Paesaggisti e Conservatori, in the field of landscape architecture, was presented during the 2-day City_Brand & Tourisme Symposium. A jury, composed of various experts, selected the project as prize-winning within the Cultural Landscape category. The jury report is positive about the project:
"A careful and refined design intervention, in which the perception of the landscape represents the dominant theme due to the redefinition of the route of the N331 in the Overijssel Province of Holland. An opportunity to reflect on the identity of the landscape and its perception. "
The project was explained in a pitch by the office during the Symposium.

The design for Zuiderzee view was developed in 2012/2014 by the office on behalf of the Sjoerd Cusveller / province of Overijssel. The province had plans to transform the N331 between Zwartsluis and Barsbeek into a main access road. During this transformation, the accompanying cycle path was moved from the crown to the inside of the Zwartemeerdijk and the wide views, which represented an important quality of the cycle path in the present situation, were largely lost. The objective of the province of Overijssel was to compensate for the loss of wide views along the cycle path through the introduction of a viewing point. A viewpoint that would be aimed at experiencing the identity of the area as a former coastal area and former seawall of the Zuiderzee, as an important meadow bird area and an area of fishermen and merchants.
A high-altitude location was sought as a location for the resting place, in an outer bend of the Zwartemeerdijk, where the water of the Zwolsche Diep and Zwarte Meer are relatively close and the panoramic views are maximized. Ultimately, a place was chosen at the Tolhuis; the place where the Oppen Swolle goes from a route along the dike to a route at the top of the dike. Striking qualities of the place are, in addition to the presence of the Tolhuis, the proximity of the Bird Island and the reed well in the foreign countries. The resting place is designed in such a way that it stands out from the N331 as a robust natural stone staircase in the Zwartemeerdijk, such that motorists and cyclists are literally invited to visit. Located at the side of the Tolhuis a corten steel fence to which you can attach your bike. A poem is engraved in the steps of the stairs, written for this purpose by Hellen Bosma, Poet of Overijssel (2013-2015). As you climb the stairs, the poem comes word for word to you: "LOOK, AT EVERY STEP THE LAND DECENTS AND THE LIGHT RISES". The actual resting place is on the dike; a robust, natural stone slab, which protrudes slightly over the crown of the dike. The plate is folded over on one side into a seat with the name engraved in the back with large letters; ZUIDERZEEZICHT engraved. Two historical map images are engraved in the base plate; the first of the area around 1900, when the Zuiderzee still had an open connection with the North Sea and the second around 2000, when the last hole in the dike of the Noordoostpolder was closed. Then there is the current view with the outer areas, the reed well and the Bird Island. Together they underline the dynamics and development history of the landscape on the spot.
With regard to materialization and detailing, the resting place fits in perfectly with the existing landscape. For this purpose, sturdy and pure materials and details were chosen; natural stone and corten steel with a clear reference to water and shipping.