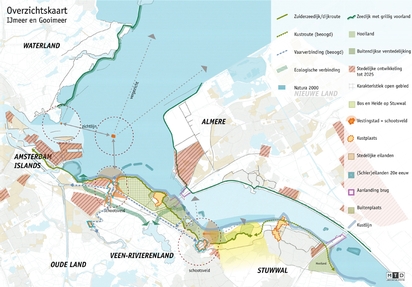 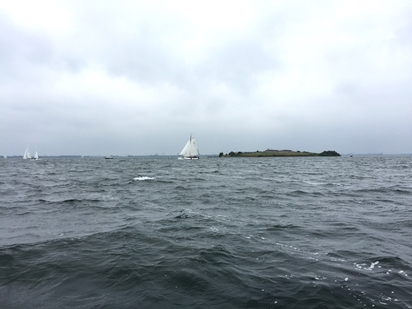 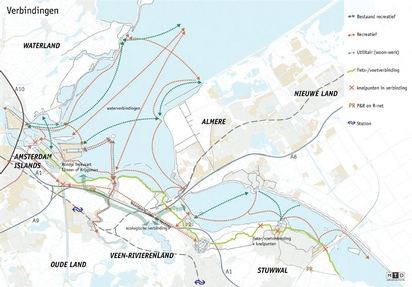 The Region Gooi and Vechtstreek and the municipalities Blaricum, Gooise Meren and Huizen jointly provide content and monitor the coherence within the developments of the lakes and the coastal zone of Lake Gooimeer, IJmeer. Together with MTD landscape architects, the opportunities and threats for Gooimeer, IJmeer and the 30 kilometer long Gooise coastal zone have been examined.
This has resulted in a spatial exploration. A regional response to the developments and future visions of the municipalities of Almere and Amsterdam and of the province of Noord-Holland.

The northernmost part of the Gooi- en Vechtstreek region consists of approximately 40 km2 lakes, the Gooimeer, IJmeer, a small piece of Eemmeer and a coastal strip of about 30 km. The lakes represent high, scenic, ecological and recreational values that are seen by many different parties.
In the landscape vision Gooi en Vechtstreek (February 2018), which was drawn up by MTD landscape architects, the lakes and the coastline are already mentioned as a further developed area. In addition, the municipalities of Gooise Meren and Huizen are working on a vision for their coastal zone and Blaricum is also working on spatial plans for this area.

During the exploration, opportunities and threats for the coastal zone were inventoried, analyzed, investigated and recorded in map images. Examples of opportunities in the area of recreation are, for example, sailing routes to be developed via the barge tours (rounds Muiden / Naarden and Muiden / Diemen) and the inland waterways in the fortress of Naarden and Muiden. But also strengthening the coastal zone as a recreational, scenic and ecological connection by, for example, restoring fortifications and moats in Muiden and Naarden, developing viewpoints, uncovering the history of the country estates and strengthening the ecological connections, as seen at the Hollandse Brug are seen as potential. In addition to these potentials, threats and points of attention have also been inventoried, such as the development of (new) ports, the construction of islands and developments in the outer dike area.
The exploratory survey will serve as a basis and foundation for the development of future policy and spatial plans around the IJmeer, Gooimeer and the coastal zone.