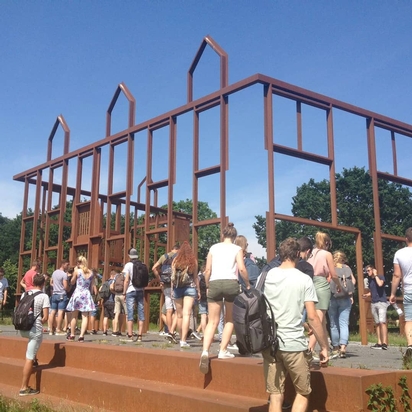 On Monday the 28th of May, the first year students of Management of the Living Environment of the HAS University of Applied Sciences were on excursion to Huize Moerenburg in Tilburg. The visit in the context of realization and management combined with the radiant weather resulted in a pleasant educational day at a unique location.

In 2006, the municipality of Tilburg and Waterschap de Dommel had the joint ambition to find a new meaning for the former sewage treatment plant (RWZI) Tilburg-East, due to the disappearance of the actual sewage treatment function and a further extensification of the water quality management of storage and purification through a helophyte filter, parts of the installation lost their function. One part is the relic of the first State Trials installation, dating from the beginning of the 19th century, and has a monumental status.
When constructing the helophyte filter, the foundations of Huize Moerenburg were uncovered, as it was inhabited between the 14th and 18th century.
MTD landscape architects was commissioned in 2007 to draw up a design plan for the area.
In the first instance, the design plan focuses on strengthening the structural elements that are present, related to the industrial past and connecting the separate time layers. The water treatment plant and Huize Moerenburg are connected by two monumental axes. On the site of the foundations of Huize Moerenburg a corten steel construction has been introduced, which evokes the memory of the baroque house, as depicted on a painting from 1700. The sloping forecourt, the facing façades and sloping floor refer to the alienating, distorted perspective in the painting.
The unique location of the area between the city and the outlying area with the water purification plant on the city side and Huize Moerenburg on the side of the National Landscape, Het Groene Woud, forms an important starting point.