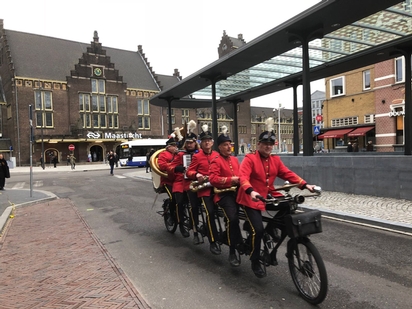 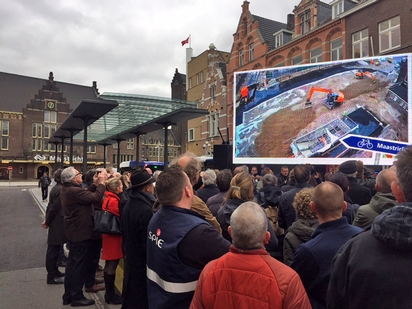 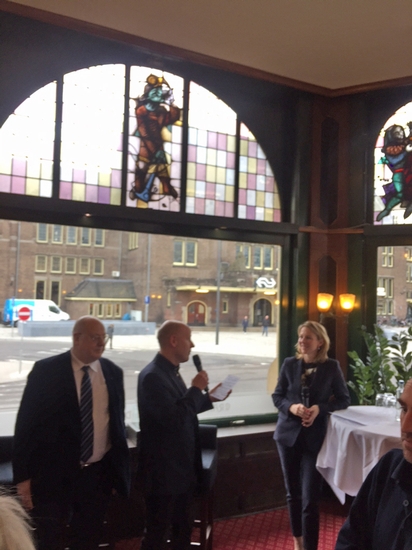 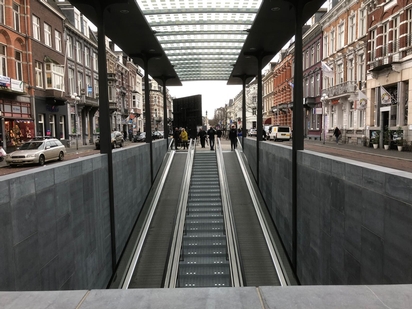 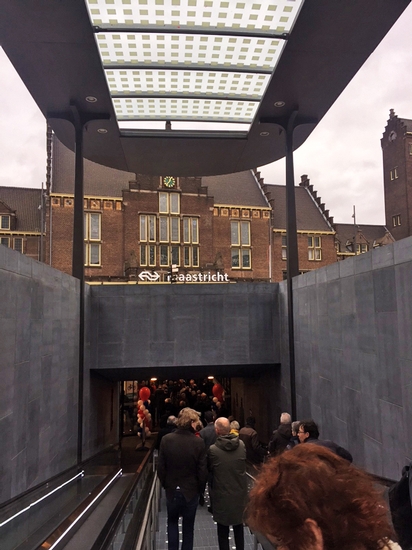 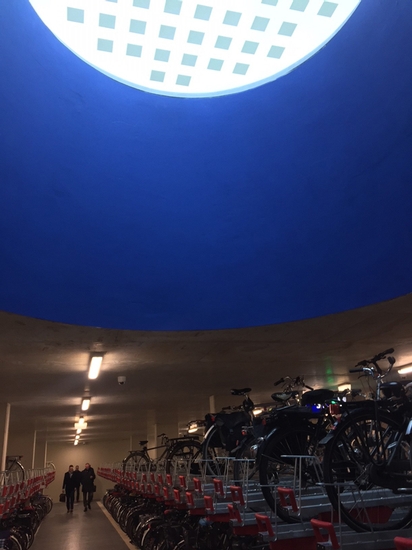 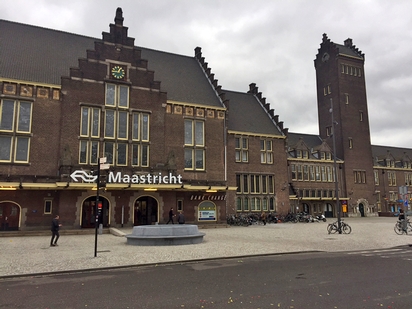 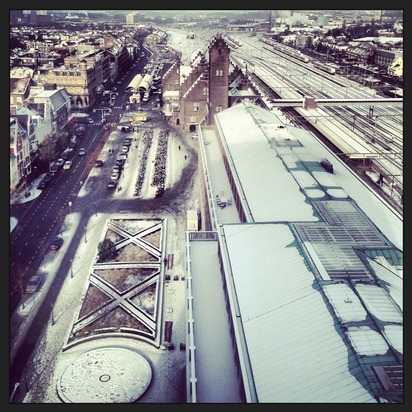 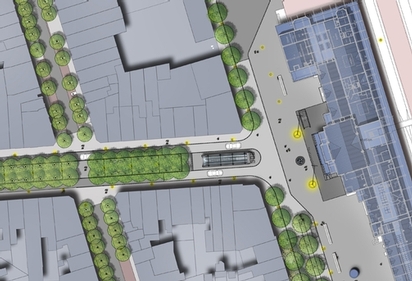 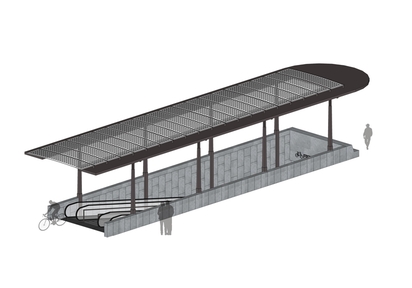 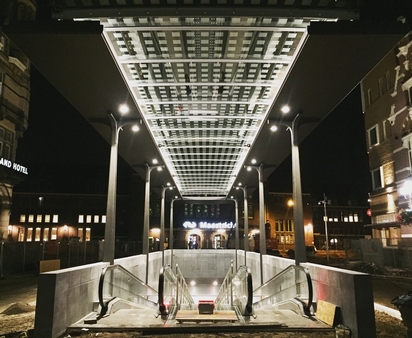 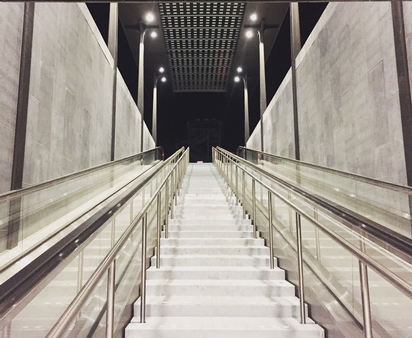 State Secretary for Infrastructure and Public Works Stientje van Veldhoven officially opened the underground bicycle parking facility at Maastricht Station last Monday. Together with the clients ProRail, NS, the Province of Limburg, Maastricht Bereikbaar and the municipality of Maastricht, contractor TBI Timmermans-Mobilis and a multicolored group of cyclists, the opening of the new bicycle shed was officially inaugurated. The garage is open daily and offers space for approximately 3,000 cyclists, including 100 public transport bicycles, 80 'outdoor model' bicycles and 40 mopeds / scooters. Cyclists can park their bicycle for free, dry, safe and for the first 24 hours.
Secretary of State Stientje Van Veldhoven: 'Your bike will never want anything else, but the traveler won’t either! If you arrive at the last minute, you will immediately see if and where there is room in this smart garage. Even if you come on a mother bike or an e-bike. These types of parking facilities are important, because they make it attractive to opt for bicycle and public transport. That saves traffic jams, air pollution and is good for your health. Nice that all parties have made this possible together. I hope we can repeat this cooperation in many places. '
The realization of the underground parking facility provides a huge quality impulse for the Station Square and the Percée; this creates the opportunity to realize an attractive Station square without bicycles and with more space.
At the beginning of 2015, MTD landscape architects was commissioned to draw up a design plan for the Stationsplein and a design for the entrances and the interior of the bicycle parking. This has been developed into a technical design in collaboration with Thomas Kemme architects. MTD also provides the aesthetic and technical supervision during the construction.
Simultaneously with the construction of the bicycle cellar, the Station Square also received its provisional arrangement. It is the intention that, after a final decision has been taken with regard to the bus station and the layout of the Percée, the definitive layout will be realized.
During the planning process intensive communication was made with the work group kwaliteitsimpuls Wijck, the planning permission review comity of the municipality of Maastricht, Bureau Spoorbouwmeester and the stakeholders PROrail and NS.

The main objective of the public space layout plan is to create a pleasant square, which can serve as a calling card for the city and can make the route from the railstation to the inner city more pleasant, recognizable and safe. Hereby, it is the ambition to maximize the integration of the entrances and light-void to the underground bike parking in the square. The main entrance to the bike parking is situated in the median strip of the Percée and is conceived as a head for this strip. The median strip hereby will retrieve its original purpose for gallivanting and lingering under a leafy canopy of trees. The trees in the median strip are maintained and supplemented.
The main entrance to the underground bicycle and scooter parking is realized in the form of a conveyor belt with a canopy. The 1.0 meter high parapet is robustly shaped and materialized in conjunction with the floor of the public space; arising from it as it where.
The canopy is shaped by means of eight-steel, 5.5-meter-high columns, which refer to the design of the columns of the canopy construction on the platforms of the railstation. They bear a steel canopy with an opening in the middle, which is covered with a slightly convex glass plate featuring a graphic grid of squares.
A second entrance to the underground bicycle and scooter parking is provided at the Station Square. It is situated just aside and in the main direction of the main entrance of the station building. This entrance consists mainly of a 1.0 meter high natural stone parapet and staircase.
An important aim of the layout plan is to enlarge the Station Square until it reaches the full width of the station building, as in the original situation. In addition, a staircase is introduced to the main entrance, so that the station building is firmly anchored to the square. It is the intention that all three doors of the main entrance will open and serve as an entrance way. A plateau is laid out around the staircase in the floor of the square, in which the second entrance to the bicycle parking is included.
Square and Percée are materialized in light gray sawn natural stone pebbles in a segment compound; plateau and staircase in (burned) Belgian bluestone tiles.
As an important element in the square, a contemporary version of the light mast, originally placed here, is brought back. The two 11 meter high steel masts are represented on either side of the main entrance; more or less at the place where they originally stood.