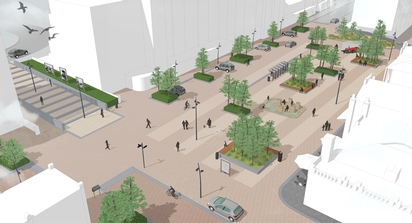 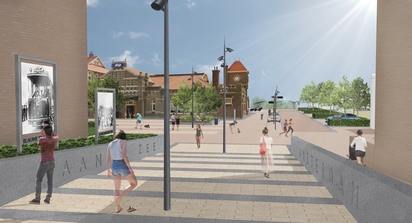 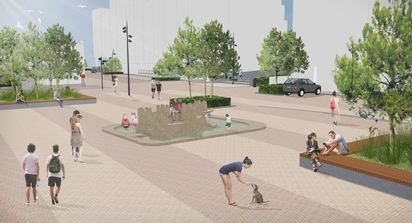 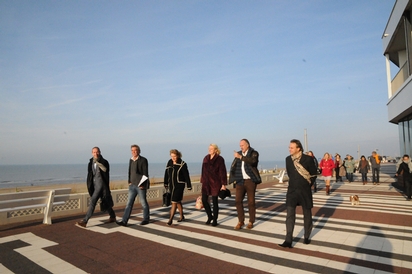 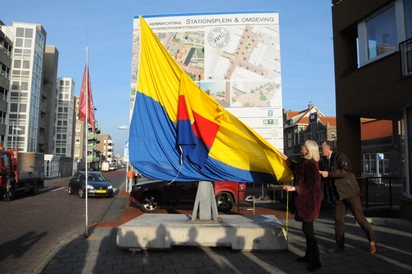 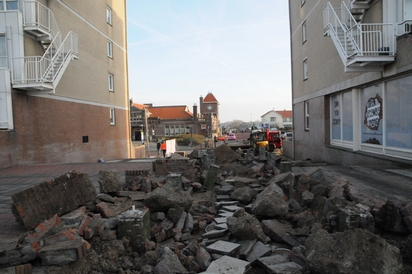 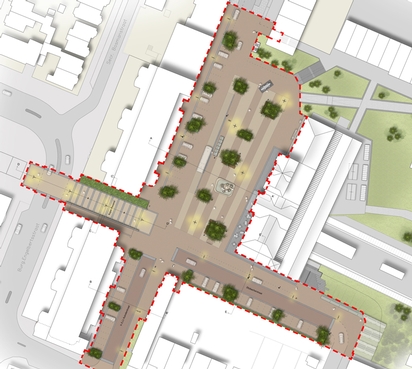 On Friday, December 16th, the deputy of Planning and Housing together with Joke Geldhof of the province of Noord-Holland and Alderman Gert-Jan Bluijs of the municipality of Zandvoort kicked off the redevelopment of the Stationsplein and the Koper Passerel in Zandvoort. This happened with the symbolic gesture of the unveiling of the construction sign, which was covered up to that point with the flag of Noord Holland and Zandvoort.
One year ago MTD landscape architects / urban designers was commissioned by the municipality of Zandvoort for the preparation of a development plan for the Stationsplein and the Koper Passerel in Zandvoort, as well as for guiding the associated participatory process with local residents and stakeholders. Secondly, the office also obtained the contract for the technical development and procurement. Meanwhile, the project has been tendered and contractor Van der Veekens from Zaandam started the construction of the project. The intention is to reach completion before April 2017!

The redesign is part of a larger project "Entree Zandvoort’’ which has the ambition to give the entrance of the station and the route to the beach a quality improvement. The project provides a spatial, but also an economic boost to Zandvoort as the liveliest resort of the Amsterdam Metropolitan Area. Therefore, the province has granted a 3.6 million euro subsidiary for the project.
In addition to the redesign, the project includes the attachment of the historic station building and the so-called Palace area to the square. This proceeded in cooperation with NS and the track builder.
Particular attention has been paid to strengthening the identity or in other words the DNA of Zandvoort. This has among other things led to a special 'sand'- and water sculpture in the middle of the square in the form of an oversized sandcastle. The object, designed and engineered by the office is robustly materialized in a sand colored yellow granite. It provides reasons for the visitor to stay and meet on the square and perhaps snap a special photo moment as a souvenir of a visit to Zandvoort aan Zee or in other words Amsterdam Beach!